Here is my in-depth evaluation of the AT&T home security system, branded under the AT&T Digital Life moniker.

The system does not use a phone line, but instead relies on AT&T’s wireless network to communicate. This means a home phone is not required in order to use the service. There is a battery backup which will last about 24 hours in the case of a power outage.

The system comes with door and window sensors, a control panel, communication unit, and may include options such as a touchscreen door lock, garage door access, cameras, and water pressure sensor.

My installer recommended that the large communication unit, shown below, be installed in a closet with power. None of my closets included outlets, so we had to choose an alternate location for this device. 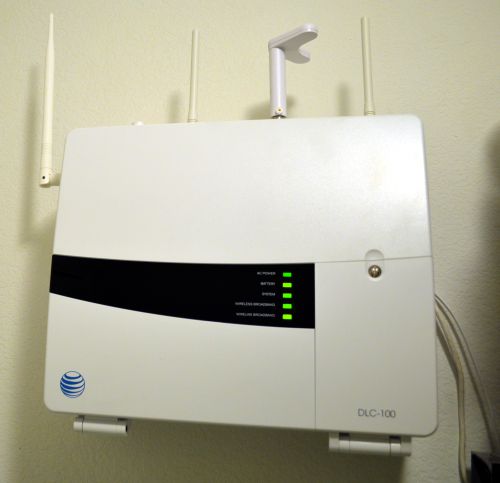 Below I’ll describe each of the features and give my thoughts on them, as compared to other security systems I’ve used in the past. 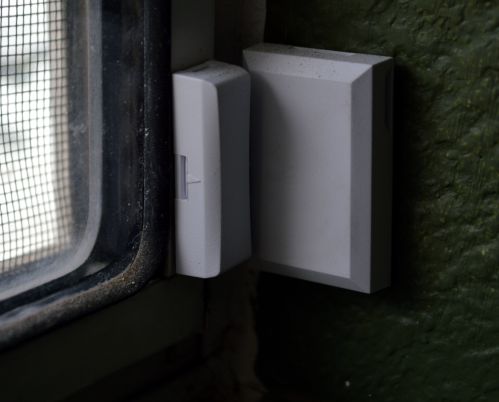 The sensor in the photo above is only about 1 inch wide and a quarter of an inch thick.

There are two sirens which plug into wall sockets. These provide alarms and chimes, and can be plugged into any outlet in the home. The installer suggested placing one in the master bedroom and another in a central living area. It chimes with three beeps when a door or window is opened, and two beeps when one is closed. I asked the installer if there was any way to turn this chime feature off, and he said he did not think there was, but I could possibly call support to verify this. 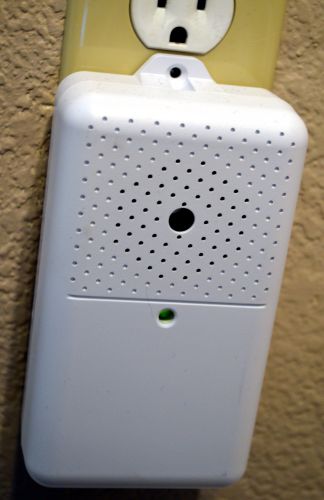 Depending on your own preferences, the chime can be comforting or occasionally annoying. While it’s nice at night to know that you’ll be alerted when any door or window is opened, it can also be a bit of a nuisance when trying to sleep if someone else in the home is going in and out regularly. In my case, with the siren only a few feet from my bed, I have found that it wakes me up whenever it chimes. Having teenagers coming and going in my house means that sometimes it chimes at night when I’m already asleep.

The instructions describe the siren as “a proprietary 915MHz wireless siren that is capable of annunciating alarms and keypad chirps.”

Costs vary, depending on which options you choose. There are a variety of features, such as water pressure sensor, camera, garage door, etc. Monitoring is about $40 a month. A 2-year agreement is also required, with an early termination fee of up to $720. AT&T often runs promotions for free installation or other reduced fees.

One of my favorite features is the ability to access the system from my mobile phone. The app is aptly named “AT&T Digital Life” and it is available for Android, iPhone, and Windows Phone. I prefer the interface on the Windows Phone, as you slide screens left and right to access features, as opposed to selecting menu items at the bottom of the screen. Below is how the interface looks on all three platforms. 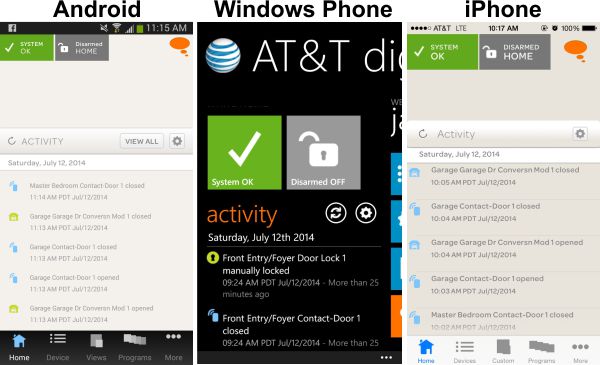 This is the AT&T Digital Life app on the three major mobile platforms.

From your phone, you can arm and disarm the system, check to see when any doors or windows were recently opened, unlock your front door, and open your garage door. In my case, this came in handy when I needed someone to feed my cat while I was out of town. I was able to let them in the house – from halfway across the country. If I had the camera option, I would have been able to visually monitor activity in my home, too.

I should point out that the mobile app isn’t perfect for any platform. There have been a couple of occasions when it didn’t seem to register a change in the status of my garage door – meaning the app showed the door closed when it was actually open. This also prevented me from closing the door via the app. I have seen a similar scenario with the front door. Logging out of the app and logging back in seems to fix this glitch, and to be fair it is quite a rare occasion to see this glitch.

When you’re logged into the mobile app or website, you can review a history of any doors or windows that have recently been opened, or when the alarm was armed or disarmed. This is quite useful in providing a quick glance to make sure everything is as it should be on the home front.

There are two door locks options available. I opted for the fancier door lock with a touchscreen keypad. They are available in gold or silver and are produced by a company called Yale (the official product name is “Yale Real Living Touchscreen Deadbolt”). The touchscreen allows you to set a code to be used in place of a key. You simply touch the screen to activate it, type in your numeric code, and hit the star key. As stated above, the door can be locked or unlocked via the mobile app, thus there are three ways you can open your door: app, key, or code.

The photo below shows the AT&T deadbolt door locks. On the left is the exterior keypad which is touch-sensitive and can be programmed to unlock the door with a numeric code. The photo on the right is the interior portion of the lock. 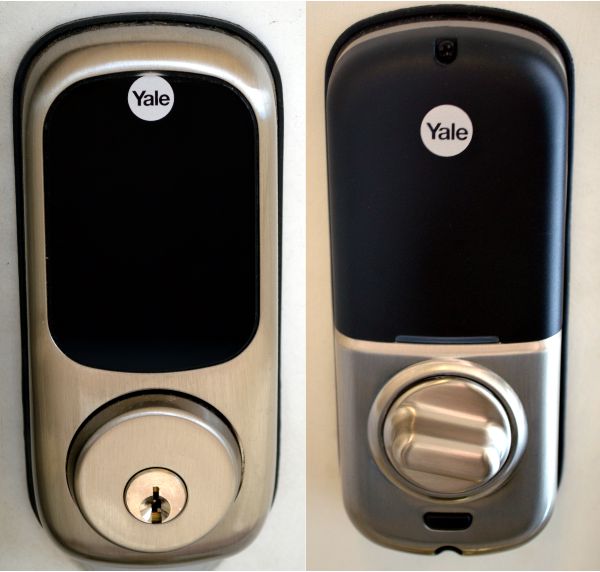 You can set up different users with different levels of access. Each user can have his or her own code to arm or disarm the alarm. This may be helpful if you were to have a guest staying with you, but you didn’t want to give them your access code. In such a case, you could create a temporary user, grant them access, and then remove this access once the guest has left.

To disarm the alarm, you simply enter your code. There is no need to press any other button such as the pound key or “off.” To arm the system, you only need to press your desired selection, such as “Stay” or “Away.” I had been accustomed to older systems where you were required to enter your code and then “stay” or “away” but that is not the case here. 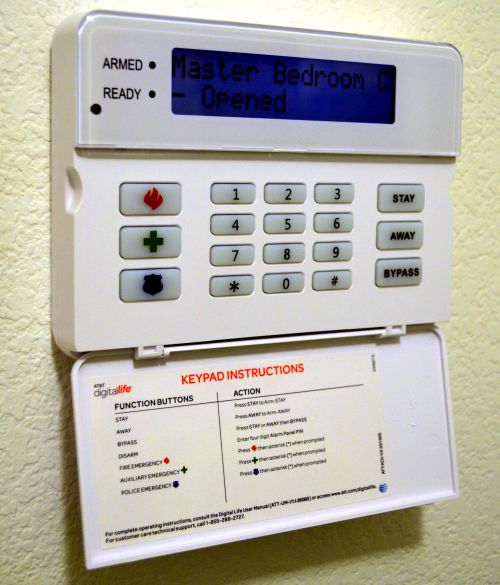 Bypassing is also a simple procedure. You simply set the alarm when a door or window is open, the select the Bypass button. This is much simplified over the method I’ve used with other systems where you had to enter a code for a specific sensor.

The keypad also features three emergency codes: Fire, medical, and police. These can be accessed by pressing the appropriate button and then the star key. My installer explained to me that the reason the star key was added is because it would be easy for someone to accidentally press one of the emergency buttons if there wasn’t a second button required to be pushed.

A common feature of security systems is the use of a code word or phrase to be given to a security representative should you alarm be engaged. AT&T includes this feature, and refers to this word as your “passcode.” In years past, the security company would typically call your home phone in the event that the alarm were to sound. In the case of an accidental alarm, you would provide them the code word and tell them it was an accident. In the 2010’s, when nearly 40% of American homes do not have home phones, this process becomes a bit tricky.

What were to happen, for example, if you have your cell phone listed as the number to call in the case of an alarm, but you’re not home and another member of the family accidentally trips the alarm?

I posed this scenario to a representative at AT&T. She said that the customer can create up to 5 emergency contacts, and AT&T would “simply go down the list” until someone is reached. That person would then go to the home or tell AT&T to call emergency services.

The AT&T Digital Life home security system is currently only available in a handful of large cities in the U.S. It appears that they are slowly rolling it out around the country.

AT&T’s home security system is a competent entrant in the home security market. The only feature that needs improvement is the reliability of the mobile app, which on rare occasion does not provide an accurate status. Features I like the most are automated door lock and garage door, plus the ability to manage and view history via mobile device.

If you’re comparing home security systems, I recommend including AT&T’s Digital Life on your short list. It is a viable and robust system with some very useful features.