Cellucor P6 Extreme is a supplement marketed to men for a variety of purposes. I tried the product for an 8 week cycle in 2014 and offer my observations plus a 2016 update.

This supplement by Cellucor claims on the packaging to be a “Natural Testosterone Booster” which can improve strength, lean muscle, and libido. It is only designed for use by healthy adult men over the age of 18. Two capsules, twice a day are to be taken with or without food. It is recommended to “use for up to 8 weeks in a cycle then discontinue use for 4 weeks before starting a new cycle.” Both the official description and a salesman at GNC suggested that this product inhibits the formation of estrogen, which supposedly avoids some of the side effects of other testosterone boosters.

When I first purchased the product in 2014, it was called P6 Extreme. It has apparently been re-branded as “P6” or “P6 Red.” The product is mostly unchanged, other than the name. In fact, the label shown on the Cellucor site still refers to it as the “P6 Extreme Blend.” The only difference I can see between P6 and its earlier incarnation is that the proprietary blend has increased from 947mg to 1114 mg. I may refer to it by either name in this review. The company has since released “P6 Xtreme” which appears to simply contain a higher dose of the P6 Xtreme Blend.

P6 Red has been around for several years, and can be found discussed in forums dating back to at least 2010. There is another product called P6 Extreme Black, which contains different ingredients and sells for about $90. The P6 Extreme reviewed here is found in a red and silver bottle, and is sometimes referred to as “chrome” (my GNC receipt referred to it as “Chrome P6 Extreme”) and “Red” on the Cellucor website.

Two salesmen at GNC highly recommended this product, stating that it was one of their more popular supplements (it currently has a 4 out of 5 star rating on the GNC website). It was prominently displayed next to the register as a “hot item.” I had two salesmen pitching it to me from two different perspectives (a GNC version of “good cop, bad cop” perhaps?). The younger beefcake salesman extolled the virtues of muscle gains in the gym, while the older salesman noted he had experienced improvement in the bedroom while taking it. 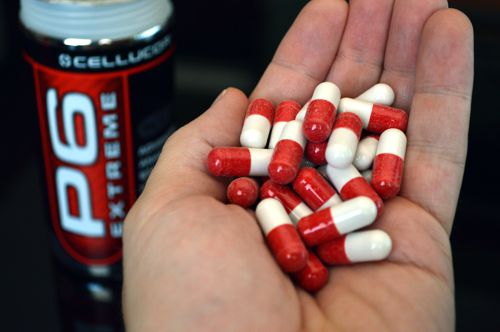 A handful of P6 Extreme capsules

I wasn’t sure if they truly believed in the product, of if they were hoping for a commission from one of their more expensive supplements. Either way, I had every intention of purchasing a supplement to review, so I took the bait.

That said, there are supplements which can provide some of the same effects of increased testosterone, which is perhaps why many supplement vendors make such claims. Even increased energy can indirectly lead to raised testosterone if that energy is put into more productive workouts. So, while I don’t buy the pitch that this product directly increases testosterone, I am certainly open to the idea that it can have an indirect effect.

The label does not list how much of any of these ingredients are included in the “blend.” Some of the ingredients are standard fare for men’s supplements (beta-sitosterol), while others just seem bizarre (ovine placenta powder). Ovine (which means relating to sheep) placenta is perhaps the most unusual supplement ingredient I’ve seen in a long time.

Note that when I first purchased P6 Extreme back in 2014, the proprietary blend listed “Bayberry (bark) extract, standardized for Myricetin.” Myself and other reviewers pointed out that this was an unfortunate inclusion (see below) due to warnings about it. Newer labels do not use the word “Bayberry” but “Myrica rubra bark extract.” Myrica rubra is simply another name for bayberry.

During my 8 weeks of taking P6 Extreme, I took notes regarding my daily activity and diet, along with any perceived positive or negative effects.

While taking P6 Extreme, I found myself with slightly more energy, which translated to slightly more productive workouts. This, I believe, is where any increased testosterone may occur – rather than directly from the supplement. In my case, it took a few weeks for the side effects to subside and for the positive effects to become apparent.

During the first 5 days, I experienced some side effects, which mostly dissipated after a few days.

After taking P6 for 8 weeks, it is my belief that the supplement provided some benefits, including increased energy. This in turn led to increased workouts, which may have led to an indirect increase in testosterone. Virility appears to have been at least slightly raised, which could either be directly related to one of the product’s ingredients, or due to increased testosterone as a result of better workouts.

I experienced a few minor side effects in the first week of taking P6 Extreme. These included dry mouth, flatulence, irritability, and sweating. By the second week, all of these side effects had subsided, except sweating, which continued throughout the entire 8-week cycle.

As noted earlier, the inclusion of bayberry extract (Myrica rubra) in P6 Extreme is my biggest concern about the product. That herb receives rather harsh warnings from a variety of sources. For more information, be sure to read my report on P6 Extreme side effects along with other observations.

Because of the vast array of similar products on the market, and the fact that we don’t know how much of each ingredient is included in P6 Extreme, finding similar alternatives may be difficult. If ovine placenta powder and beta-sitosterol are the most prominent ingredients, these can be found readily at any supplement vendor.

The chart below shows internet search history on the phrase “P6 Extreme.” As you can see, the product appears to have peaked in mid-2013, and has been on a slow decline since then. It isn’t clear if the decline is attributed to a lack of interest, or if Cellucor has simply put more marketing resources into newer products.

I feel that P6 Extreme contributed to moderate, positive gains. I’m not sure if it directly increased testosterone, or if it may have contributed peripherally by slight increases in energy which led to better workouts.

It is impossible to know if the product actually inhibited estrogen, but I will say that side effects were minimal compared to other similar products I’ve taken in the past.

P6 Red is expensive. Although I do feel that I experienced unspecified gains from the product, I can’t justify the cost of modest gains for such an extreme price tag.

The inclusion of bayberry extract is unfortunate, and could be a deciding factor when I consider purchasing P6 Extreme again. If this herb were dropped from the ingredients, I would be more likely to use this supplement again.

Note: Adding a quick postscript on December 1, 2014 here… After trying out Cellucor’s Super HD, I would suggest giving that one a look as well, even though it is marketed more as a weight loss supplement. It is less expensive and I experienced relatively positive results with it. See that review here.

Have you used P6 Extreme? Give me your thoughts in the comments below.