Clear TV Key is a television antenna advertised as a way to get "Free TV" by simply plugging it into the back of your television. But does it really work? Today I offer my Clear TV Key review with an in-depth look of the product and its predecessors.

This product first appeared around mid-2015 branded as “Free TV Key” and in fact still shows up in the embedded advertisement on the website under that name. It was later re-branded as “Clear TV Key” to tie into the popular product named “Clear TV” which has advertised continuously since 2013. The original “official” website was freetvkey.com, but that now forwards to the current domain of cleartvkey.com.

It does appear that “Free TV Key” is still used, however. I spotted a Spanish language channel advertising it under that name in April 2017.

Back in 2013, late night television viewers were inundated with images of a man out in a boat watching free TV due to his Clear TV antenna. That product was advertised with the implication that it would allow you to sidestep expensive cable or satellite bills for a one-time cost of about $20. Once you looked beyond the impressive (and simulated) images, it turned out that Clear TV was simply a standard television antenna, no different in function than a decades-old set of rabbit ears. You may be interested in my full Clear TV review found here.

Despite the fact that Clear TV is just a fancy-looking TV antenna, the product continued to blanket the airwaves and internet advertising for years, only to be ultimately replaced by Clear TV Key. There have also been a number of knockoffs hoping to cash in on the “free TV” craze. You may have seen such offerings as HD Free TV, Ultra HD Clear Vision, or TV Free-Way, all of which are simply standard television antennas marketed similarly to that of Clear TV. Prior to Clear TV, there was a product called Rabbit TV, which supposedly allowed you to watch hundreds of internet television channels. That ended up being a simple menu which pointed to internet sites you could easily access without it.

In mid-2015, not to be outdone by the slew of knockoffs, the makers of Clear TV went back to the drawing board (in what seemed to be an attempt at going back to the well once more) by marketing their next-gen product, Clear TV Key. And back for another round is the same guy featured in the original Clear TV ads, a spokesman by the name of Brian Hyder.

How does Clear TV Key differ from the original Clear TV? Clear TV is an antenna which attaches via a wire and must be placed somewhere near the television (ideally near a window), while Clear TV Key plugs directly into the back of the set and remains discreet. “No ugly antenna & no messy wires” the website states. Does that mean your original Clear TV is an ugly antenna with messy wires, too?

I will give the Clear TV Key website some credit in that it is a bit more transparent than its predecessor, stating, “Free TV Key works like your old rabbit ears!” I’m not sure why there’s an exclamation point to end that sentence, nor am I sure why they forgot to change the name from Free TV Key to Clear TV Key on portions of the website. But whereas the original Clear TV marketing seemed to imply that you’d get tons of free channels, the new round of marketing at least describes it more like it really is: a standard antenna.

What Channels Can I Get With Clear TV Key?

I wrote several reviews for Clear TV back in 2013 on a couple of different websites, and the most common question from readers was regarding the channels the product would receive. The answer is that it depends on what is broadcasting in your area.

You will be able to receive local stations that broadcast nearby. This will likely be major networks, maybe PBS, Univision, etc. You will not pick up cable-only channels such as ESPN, CNN, MTV, FoxNews, etc. If you live in or near a large city, you can expect to pick up anywhere from a dozen to 50 or more channels between network affiliates and other local stations.

When I installed Clear TV Key on three sets in my home, they all received a different number of stations. One found 50, another found 32, while the third only discovered 17. Placement seems to be the key to Clear TV Key.

How Much Does Clear TV Key Cost?

You can get Clear TV Key from the official website cleartvkey.com for $19.99 plus $7.99 “per antenna.” This means if you buy one, you’ll pay $27.98, and if you take advantage of their “double offer” it will cost you $35.97 for two. Keep in mind that a simple pair of rabbit ears from Radio Shack or Walmart may set you back about $8, and come without shipping costs or delays. There is a money back guarantee, but shipping is non-refundable.

I found Clear TV Key at a local store for about $20. You can usually find it on Amazon for about $5.

While I won’t say that Clear TV Key is the deal of the century, I also wouldn’t say that it completely lacks merit. Be sure to watch my video review at the bottom of this page. Below is a list of pros and cons which should help you decide if Clear TV Key is right for you. 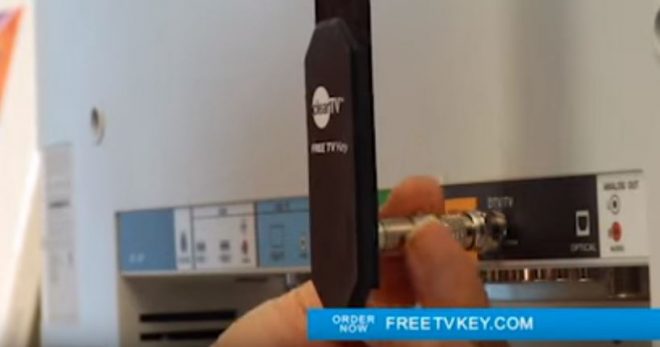 How flat do you think your TV will mount with this attached to the back?

If you have no intention of giving up your cable channels (like me), Clear TV Key (or rabbit ears) may still have a place in your home. I currently use DirecTV for four of my TV sets, and I’m quite happy with that setup. There are a couple of TV’s around the house that are barely used and are not connected to DirecTV. Those sets may be a good fit for an antenna on the rare occasions they are used, so at least they will pick up a few local channels when in use. I finally placed Clear TV Key in my son’s room so he can get a few local channels on the TV he primarily uses for gaming.

Another item I touched on above is that your geographic location will dictate the number or channels you’ll receive, and how well they will look. Here in the Las Vegas valley, there are a number of local channels – up to about 12 – which have a fairly strong reception. To contrast this, in 2014 while at Table Rock Lake, Missouri, I attempted to attach an antenna to a television there and received no stations whatsoever. You are really at the mercy of your geographic location, and the number of towers broadcasting in your area when it comes to over-the-air television. If you live in a medium to large city, you will probably get about a dozen channels. If you’re in a remote area, you may receive from zero to three. It depends on your location and any obstacles that stand between you and any nearby towers. You may want to take a look at antennaweb.org to see how many stations are broadcasting in your area. When you visit that site, you merely type in your zip code and it will display the number of towers and channels in your area.

The commercial for Free TV Key (when that was the name) was posted to YouTube back in August 2015. It features the same “Clear TV guy” as the original Clear TV ad. Although the product name has since changed, this is still the ad that is featured on the official website. And, although the website is more transparent by noting that it’s the same as rabbit ears, there is still some implication that this product may actually be a suitable replacement for cable or satellite.

“You don’t need expensive cable or satellite anymore,” the spokesman says. “All you need is the Free TV Key from Clear TV.”

There is also a moment during the commercial where we see news anchor Bob Losure during a newscast. Losure was best known for his 11-year stint as a weekend anchor on CNN Headline News (before it was known as HLN) – a channel that cannot be received by Clear TV Key. 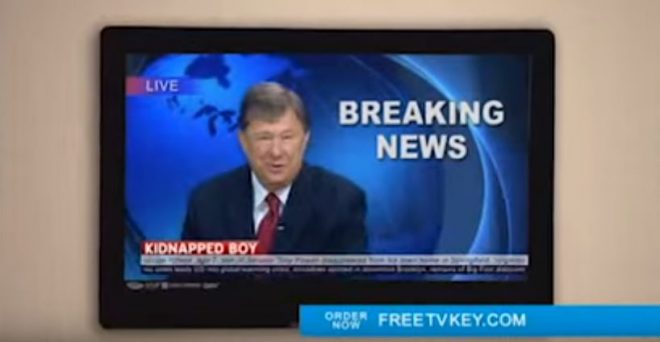 Clear TV Key by Clear TV is simply a television antenna which plugs directly into the back of your television set. It is said to include improvements over the original Clear TV by reducing wires and offering a discreet design. This hidden design, however, comes with a price, as it does not allow you to position it properly, nor is it friendly to wall-mounted designs.

Clear TV Key is not yet available in most stores, which means you are obligated to pay non-refundable shipping costs or get it on Amazon. That, combined with what I consider design flaws listed above, renders the product a step backward from the original Clear TV. While that product is is still no better (or worse) than a standard antenna, it can purchased locally at many stores and can be positioned properly for an optimal signal.

I can see this being ideal for a small set which isn’t used much and which resides near a window. You may want to take a look at the wide variety of television antennas available for sale before you make your final decision.

If you’ve tried Clear TV Key, or another product like it, please drop me a message below and give me your observations.