I've been bald for over a decade, and shaving is a big part of my daily routine. So when I first saw Rick Harrison of Pawn Stars pitching a razor called Micro Touch One in early 2014, I figured I'd be a good candidate to see if this product is legit or not. Here is my review along with additional observations.

Micro Touch One began advertising on television in early 2014, but I waited until it was in stores to try it out. Why? Because almost everything advertised on TV inflates your order with outrageous non-refundable “shipping” charges that guarantee they’ll profit, even if you return the item.

I finally spotted Micro Touch One in my local mall and decided to pick it up. It was $26.99, which included the razor, 12 blades, a stand, and instruction sheet (see photos below). Although that costs more than the television advertised price of $19.99, it doesn’t include outrageous shipping charges and their second “free” item for even more shipping. My wife and I tried the product out and wrote our first consensus review of the product here.

By the way, as of 2015, you can find this razor in many stores (typically in the As Seen on TV section) for about $20. Walmart has been known to carry replacement cartridges as well.

The Google Trends chart below shows historic searches on the Micro Touch One Razor. As you can see, interest in the product peaked in March 2014 (the same time that I first evaluated the product), with additional surges occurring in August and November 2014. Although the chart doesn’t show much activity in late 2015, it does continue to be advertised, albeit less frequently.

Other Micro Touch One Reviews

Although I’ve researched and reviewed hundreds of products over the years, it’s rare to find one where I honestly couldn’t get a feel if it was good based on reviews online alone. Usually it’s easy to filter out the fake overly-positive product reviews, but in the case of Micro Touch One, reviews ran the gamut early – and continue to do so nearly two years later. I knew I had to see for myself it this thing was the real deal.

You may be interested to know that this isn’t the first As Seen on TV product pitched by Rick Harrison. He has also been spotted in commercials for a coffee pot called Perk It. That particular item had iffy reviews and didn’t last long on the market.

Since I started shaving my head completely bald about 10 years ago, I have developed a very keen eye – or scalp – for decent razors, and I’ve learned that higher priced razors don’t necessarily achieve the best shave. For several years, for example, I used a cheapo dollar store razor that was the one of the best disposable razors I had ever used. That razor came in a 5 pack for a dollar, and I would buy dozens of packs at a time. Eventually that nameless razor disappeared, along with my stockpile – and I have not found an equivalent replacement since.

I can’t say that I’ve completely embraced the retro “safety razor” fad, if it can be called that. I’ve always been partial to the forgiving nature of cartridge razors, and I still prefer to shave in the shower sans mirror. But ever since my beloved cheapo razors disappeared from the dollar store, I have revisited safety razor shaving, and have been quite satisfied with the results.

Below are photos of the front and back of the packaging, plus the contents: razor, stand, and blades. 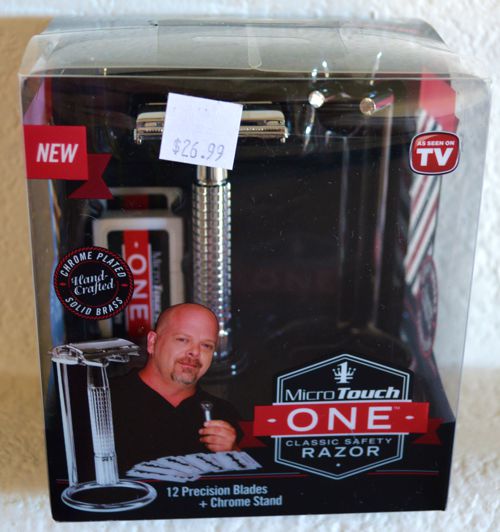 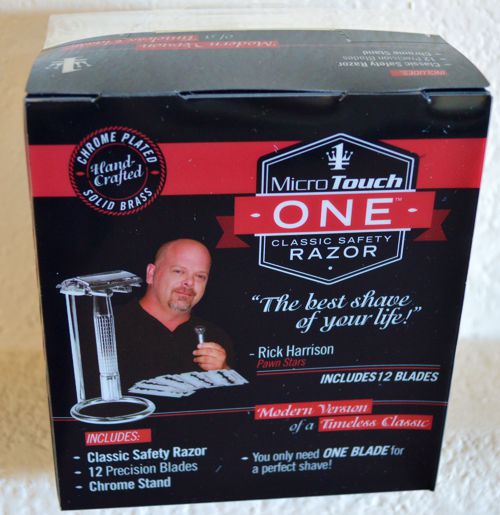 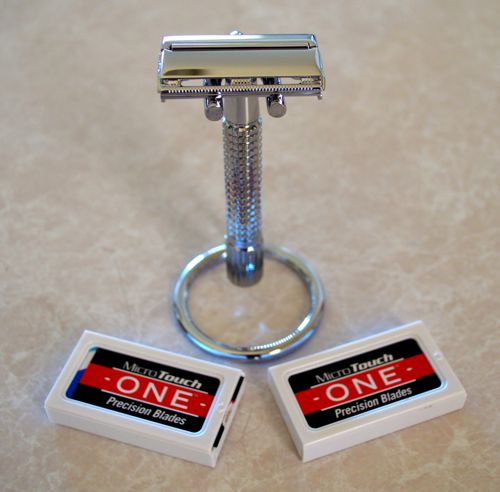 My Micro Touch One Razor Review

I’ve developed a pretty good sense as to what constitutes a good or bad razor over the years, and not just for shaving my head and face, but for shaving my chest and stomach, too. I still go back and forth between cartridge razors and high-brow old-school safety razors. When I’m in a hurry, I reach for the disposable. When I want to look extra smooth, I reach for the safety razor.

For those not accustomed to safety razors, they may not seem as forgiving as “regular” multi-blade razors. To  me, they just take more concentration. I can’t mindlessly shave my head while using a safety razor. You may be surprised to learn that there are entire websites dedicated to the art of shaving, with safety razor snobs and aficionados dissecting shaving in great detail. Like most guys, however, I simply want a good shave without paying a fortune.

Micro Touch One is a different kind of razor than you probably use now, and you’ll have to get used to it. The packaging even includes a quote attributed to Rick Harrison which reads, “Like anything new, it may take you a few shaves to get used to the MicroTouch One, but once you do I’m sure you’ll love it.” The instructions also state, “From the late 1800’s to the 1970’s this was the way to shave.”

You may be interested in my review of another Micro Touch shaving product, the Micro Touch Max.

Unlike “regular” razors, there is a preparation process required when using a safety razor. Micro Touch One’s instructions suggest that you either shave after showering (to soften the skin and prepare the beard) OR place a hot washcloth on your face for 1 to 2 minutes followed by shaving cream or gel.

I used this razor for several months, and found that Micro Touch One performed surprisingly well, given that it is an As Seen on TV product. The blades (made by Dorco) do a fine job of gliding through stubble. The technique required is a little different than with disposables, and you are better off taking small strokes and tilting the blade at about a 45 degree angle. And, perhaps, most important, you will thank yourself for not using much pressure. I used it on my face, scalp, and chest, and did not cut myself once because I took caution in using a minimal amount of pressure. I asked my wife’s honest opinion after my first shave with Micro Touch One, and she said she felt that my face was smoother than normal, but that my head felt about the same. I found the handle to be sturdy enough, but it is also a little shorter than I would have liked. I also use the chrome stand to hold the razor when I’m in the shower, but I remove them both when I’m done.

If you use the Micro Touch One with short strokes, with the grain and very little pressure, and tilt it at a 45 degree angle, you will find it easily out-performs even the higher-end multi-blade cartridge razors. In my case, I use it in the shower, and lather up my face and head separately with shaving gel.

Bad reviews for Micro Touch One are likely from people who used it and were unhappy with the experience of shaving with a safety razor. While theses complaints aren’t unique to Micro Touch One, it is the only old-school razor being advertised on national television, thus under more scrutiny. Not everyone wants to re-learn shaving, and there are undoubtedly those who were unhappy with Micro Touch One because it to requires more care and technique than some men may expect. The blade is quite sharp, and those who attempt to use disposable/multi-blade shaving techniques with this razor will likely find some red shaving cream in the sink.

How does it rank alongside popular safety razors? It’s probably an over-priced entry-level safety razor, but – forgetting the price and As Seen on TV caveats – the Micro Touch One does deliver a better shaving experience than standard multi-blade razors, for less cost over the long run.

I used the Micro Touch One Razor for about three continuous months. Eventually, I settled back into the ease of cartridge razors, although I don’t look back at my experience negatively. I should note that leaving the razor in the shower is a bad idea. As you can see in the photo below, the blade itself rusted rather easily. The base also “froze” in place from exposure to water in the shower, and can no longer be rotated. 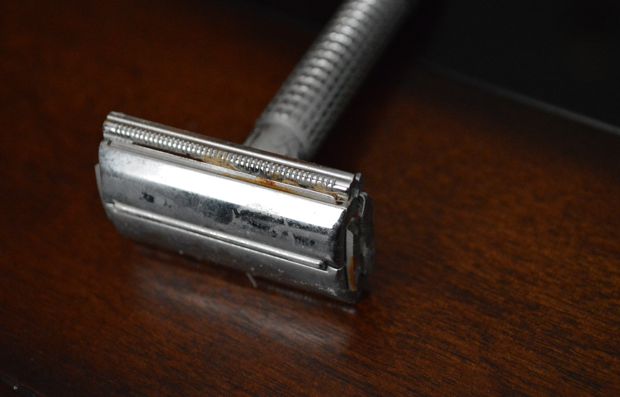 Rust is not unique to this razor or safety razors, but I thought it was worth mentioning, as some consumers may feel that because the product is stainless steel that it won’t rust. 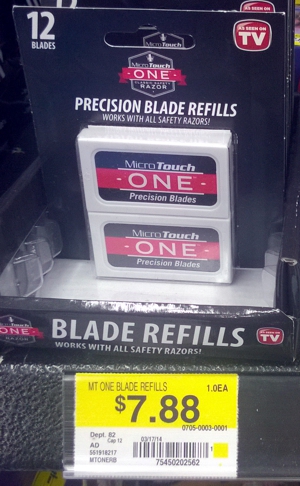 You don’t have to buy the Micro Touch One brand refills, however. Any safety razor refills will work, and you can find these at stores such as Walgreens for about $6 for a 10 pack.

If you just want a way to shave cheaply without obsessing over the closest shave of your life, you probably aren’t a good candidate for a safety razor such as Micro Touch One. If, however, you are drawn to the art of shaving, or simply want a better shave than you’re currently getting, then Micro Touch One may be a good entry level razor for safety razor shaving. Keep in mind that there are better safety razors out there, but if you do pick one up and have a little patience, you just may discover this old school method of shaving still has merit.