My observations about a product known as Cebria, which is advertised as a solution to age-related memory loss.

Cebria has been advertising since about 2012 as a natural memory enhancement supplement. The official website is cebria.com, which was registered back in 2001, although the domain was parked until 2012. By the end of 2015, Cebria could still be seen advertising online, although its television campaign appears to have ended.

How much does Cebria cost?

Unfortunately, a new user can’t simply visit the official website and order a bottle. You must go through their “free trial” in order to to obtain your first bottle of the product.

They also give you an ebook and a supply of “Perfect Omega” which you also must pay $7.95 for if you want it.

In 2012, the website claimed you could “reverse memory loss by as much as 10-15 years in just 30 days.” That tagline has since been removed from most of the website, although it appears in a video about the science behind Cebria. 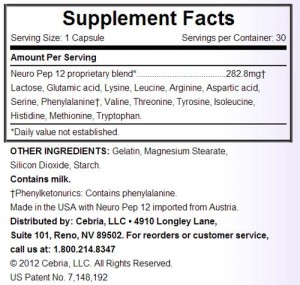 The label for Cebria is listed on the website in the “How it works” section.

It is a proprietary blend of “Neuro Pep 12” which includes:

Many of these amino acids have been associated with cognitive health, but you’ll note that the label does not list the amount of any individual ingredient found in Cebria.

Although the label is provided, what we don’t see, however, is a link to studies which confirm positive results in taking amino acids. As I’ll show you below, you can find a study which negates some of the claims about the product.

A WebMD article lists several popular supplements – that are not found in Cebria – as possible cognitive enhancers. These include ginkgo biloba, fatty acids, Vitamin E, Acetyl-L-carnitine, and ginseng.

I take an amino acid supplement from GNC called Amino 1000. It contains all of the amino acids listed on the Cebria label above, plus more – 20 amino acids in all. That product costs about $22, and requires no free trial or auto-ship, not to mention that it is available locally. (I have no connection with GNC, and purposely do not link to that product so I will not appear to be profiting from it.)

I first noticed advertising for Cebria late one night while scanning cable TV channels. An infomercial called “Losing Your Memory??” was airing. The infomercial extolled the virtues of Cebria, chock-full of customer endorsements (“I swear by it!”) and impressive graphics showing the “effect of concentrated neuropeptides.”

Cebria’s website claims that “In a double-blind study, Cebria® was shown to significantly improve short-term memory in test subjects.” The video shows the product specifically mentioned in International Clinical Psychopharmacology: 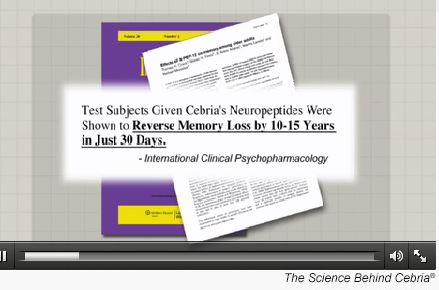 This screen capture from a video on the Cebria website cites a study that I could not find.

The screenshot above shows a quote which includes the product name: “Test subjects given Cebria’s neuropeptides…” A search for the word “Cebria” on the International Clinical Psychopharmacology website delivers no results. It isn’t clear where this study can be found or what it actually says, as there is no link on the Cebria website, nor any mention of Cebria where the study is supposedly located.

What I did find, however, was a 2005 double-blind study which took a look at the “Effects of N-PEP-12” on memory among older adults. Note the similarity in names between that study and Cebria’s blend, called “Nero Pep 12.” According to NYU Langone Medical Center, the 2005 study found:

“…a proprietary mixture of substances called neuropeptides have been extensively marketed for improving mental function. Radio, television, and Internet advertisements state that this product has been shown to bring about ‘a reversal of ten years of short-term memory decline.’ However, this claim is not founded in reliable evidence.”

The concerns I have about Cebria are:

As of December 2015, Cebria holds a 3 star rating on Amazon. While this is by no means a glowing endorsement, it does show that at least some customers are pleased with the product.

As with most supplements, results will be very subjective and are likely to vary based on the individual.

I have taken amino acid blends which contains all of the ingredients of Cebria, and whatever effects they may have are fringe at best. If you want to try taking an amino acid blend to see if it helps your cognitive function, I suggest going to a local supplement vendor and taking a look at the options they have available. You should be able to find all of the ingredients contained in Cebria for a much lower cost.

Have you tried Cebria or considered purchasing it? Give me your observations in the comments below.