Enduracool is a line of cooling towels by Mission Athletic Care. Today I’m giving my observations for two of their most marketed products in recent years: the Enduracool Instant Cooling Towel, and the newer “Multi-Cool” product – both of which have been seen in television ads. The official website is missionathleticare.com, although lowes.com/mission has also been used in advertising in the past.

The Instant Cooling Towel was the first to be advertised, and is endorsed by several athletes such as Reggie Bush, Dwayne Wade, and Serena Williams. The name was changed slightly around 2015 to call it the “Cooling Microfiber Towel” instead of the “Instant Cooling Towel.”

They can be machine washed with like colors and no bleach, and tumble dried on low. 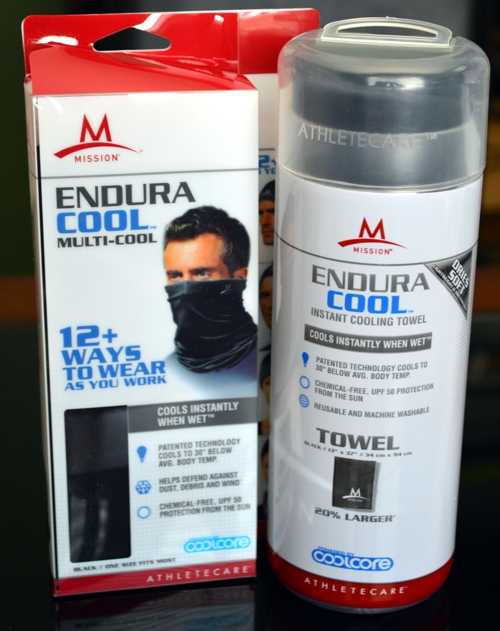 I purchased the Multi-Cool and Instant Cooling Towel – both in black. Photo: flickr/wafflesatnoon

How much do Enduracool towels cost and where can I buy them?

Advertising claims that the products drop as much as 30 degrees below average body temperature. The cooling towel has limited options regarding how it can be worn, but the Multi-Cool can be worn in a variety of ways, such as skull cap, hair wrap, beanie, neck shield, ninja, headband, hood, face mask, etc.

As long as Enduracool stays wet, you can just snap it and it will get cool again. The products are said to stay cool for two hours.

As of January 2016, the Multi-Cool is available in 9 colors online while the cooling towels are offered in 13 patterns.

Upon checkout, the cashier told me that she had one of the towels and said it was “fantastic.” She also pointed out that the key to using the product was snapping it on occasion.

I enlisted my son to help with my initial test of the products. He chose the towel, while I opted for the Multi-Cool. We doused both products with water, wrung them out, snapped them a couple of times, and headed out the door. We took a 30-minute walk in desert weather: At 10:30am the temperature was 101 and the humidity was 15%, which is typical Las Vegas weather for June.

For the towel, my son felt that it warmed up a couple of times during our walk. He stated that snapping it did seem to re-cool the towel. My Multi-Cool seemed to slowly dry out, although upon completion of our 30-minute walk, it was still damp enough to keep my head cool.

We felt that both products worked generally as advertised, but we agreed that the Multi-Cool not only proved more functional, but looked more stylish.

Enduracool Versus a Regular Towel

I couldn’t help but wonder if the Instant Cooling Towel was superior to a damp towel draped around my neck. I attempted a similar test with a regular towel, and found that it stayed cool in a manner similar to Enduracool, but that it dried out faster, presumably because it was made of cotton.

I tried out the products in the arid desert climate of Las Vegas, and found that they worked generally as advertised. I have read some online complaints that the product is less effective in more humid climates. Indeed, the care/instruction sheet included with each product states, “Humidity may reduce the effectiveness of the Multi-Cool (or towel) or require more frequent re-activation.” This could be the reason that Enduracool products have mixed reviews.

I took both the Enduracool Multi-cool and the Instant Cooling Towel with me to the humid environment of Table Rock Lake in Missouri in July 2014. Whereas I found both products to perform as advertised in the dry desert heat, I did not find them to be as effective in high humidity areas. Because they rely on evaporation, the high humidity appears to negate this cooling effect. On a hot, humid July day, the towels provided no more relief from the heat than my wet shirt stuck to my back.

Below is my review of two Mission cooling towels.

The consensus here was that the Multi-Cool was the superior and more versatile of the two Enduracool products, although it has a minimal presence on the Mission website. Whereas the towel can be draped around the neck or used to wipe areas of the body, the Multi-Cool can be worn more strategically and looks more stylish.

It isn’t clear if there is anything special about the materials used in the Enduracool products, or if similar results could be achieved by other inexpensive polyester materials. I found the product to work quite well in the dry desert climate of Las Vegas, but I could not duplicate this success in a humid climate. If you live in a dry climate, you will probably like the product, but if you live in a humid climate, you may not be as impressed.

Have you used Enduracool? Let me hear your experience in the comments below.