BuyNSave is a nasty piece of adware which hijacks your web browser and constantly spams you with unwanted ads. It took me some time to get rid of it, and here are the steps I followed to finally remove it completely.

I tend to refer to this unpleasant extension as malware, although technically it should be classified as “adware.” I think its blatant intrusiveness lends itself to the more harsh “malware” title, and I’ll use those terms interchangeably here. I used the word “Virus” in the title above because that’s apparently the phrase most searchers are using on Google. BuyNSave is not technically a virus, but such semantics are moot to frustrated users who just want to be rid of it.

BuyNSave probably found its way onto your computer after you downloaded and installed a program. It appears as an annoying popup at the bottom of your screen whenever you browse the web. After my son’s computer was infected with this malware, it took me some time to get rid of it. Here’s what I did. 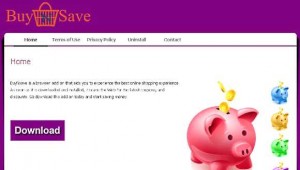 BuyNSave uses a cute pig as its mascot, but it hasn’t won over many consumers.

I read a dozen or so instructions on how to remove BuyNSave, and most were quite similar.

Typical instructions tell you to remove the program via Add/Remove programs, and also to disable/delete BuyNSave as browser add-ons. When I did this, however, BuyNSave remained. As it turns out, one additional step was needed for me to completely get rid of it.

Eventually, I found a combination of techniques removed it from my system. They include:

Although the steps above are what worked for me, I have read that some users had luck by removing their user profiles from Chrome as well. I did not find this to be a necessary step, but wanted to mention it in case you are still having problems.

To remove a user in Chrome, click your name way at the top right, then click on “Switch Person.”  When you mouse over your photo, a little drop-down appears at the upper right corner of your photo. Click that and select “Remove this person.”

After performing all the steps above, you may want to restart your computer and test it out.

BuyNSave is an annoying adware extension which can be tough to remove, and most people miss a key step to completely eliminating it from their systems. If you have anything to add to the article above, please leave a comment below.