Today I offer my review of Mandoo Tours in Grenada, after taking the half-day Spice Plantation Tour in January 2015.

I had the pleasure of taking a tour with Mandoo on January 29, 2015. The review below was written in the hours immediately after returning to my cruise ship from this tour.

I booked my tour with Mandoo directly from his website at grenadatours.com. I arrived at the island via Royal Caribbean Cruise Lines, but Mandoo was not one of their sponsored excursions. Because Mandoo had such high praise online, I opted to book with him.

Mandoo was waiting just outside of the cruise ship area to greet us. There were about 20 people on the bus, and Mandoo himself was our guide. The bus was clean and comfortable, and the air worked well. Mandoo spoke through an amplified headset so that all the passengers could hear him. 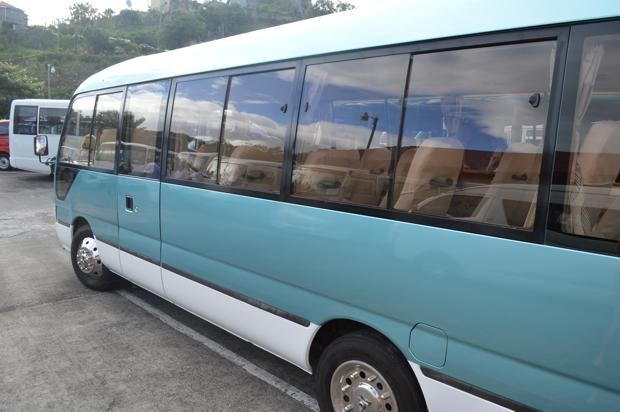 This is Mandoo’s tour bus.

Most of the tour was in the van driving as Mando pointed out notable structures, foliage, and other landmarks. He often pulled over to show us various flowers or plants related to the spice industry. He also talked in depth of past and present struggles of people of Grenada, and provided a rather extensive history of the island.

We only made three stops: a spice plantation, a waterfall, and the Grand Etang National Park.

Our first stop was at a spice plantation where Mandoo gave several demonstrations about the process by which many of the local spices are created. He passed around leaves, spices, and seeds from various stages of the process. 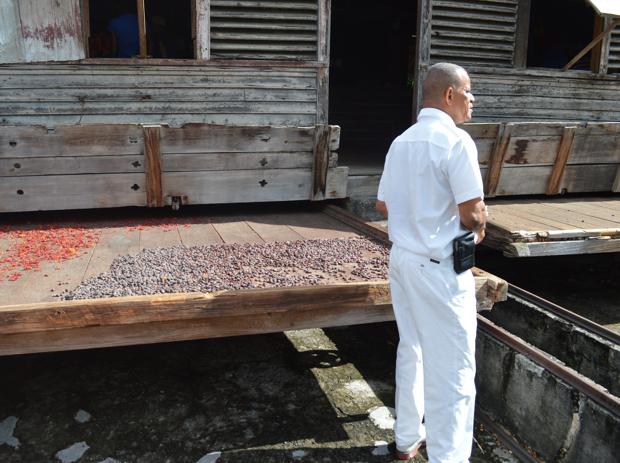 Mandoo speaking at our first stop.

Our second stop was at Grand Etang National Park, which is where Mandoo was able to call a wild monkey out of the jungle toward our group. Using bananas, he coaxed the monkey to jump on my head in order to get a banana. He repeated this with several guests before the monkey ran off into the jungle below. Mandoo also told us a little about the crater below. We were given time to shop, eat, and drink in the area for about 20 minutes, and then headed through Black Forest, where we passed a rainbow eucalyptus tree. From there we headed down the mountain and back toward our ship. 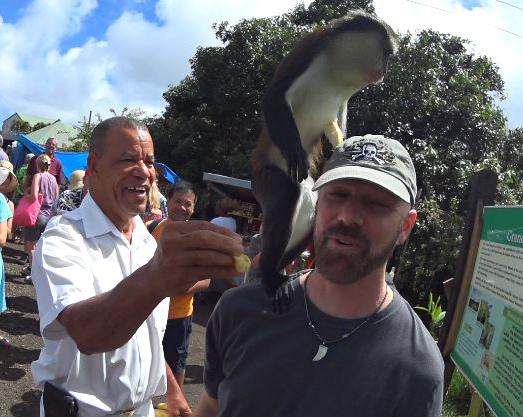 A wild monkey crosses my shoulders for a banana in Grenada.

Our final stop was at a waterfall, and it was a very short stop. From there we drove back to the port. Upon exiting the bus, Mandoo stated “If you have any questions, you have my email. Now we are friends for the rest of our lives.”

Mandoo has a magnetic personality, and a wealth of knowledge about Grenada and the Caribbean in general. His tour was part history lesson, part tour, and part demonstration – all of which made his presentation interesting and enjoyable. His depth of knowledge and obvious love for his country showed.

I found Mandoo to be personable and knowledgeable. He traversed the narrow winding roads with ease as he talked in depth about the history of the island. It was also apparent that Mandoo knew much of the population. “I know 50,000 people in Grenada,” he joked. But as he drove through the towns and mountainside, he seemed to know virtually everyone along the way, and acknowledged them with a honk or a wave.

We were also entertained by the manner in which Mandoo and other drivers constantly honked at each other, and how each honk seemed to mean something different – yet its meaning was always understood.

I created the video below during my tour with Mandoo. It is a time lapse recording of the end of our tour as we drove through St. George’s back to our cruise ship.

If you want an overview of Grenada with a couple of hands-on demonstrations, Mandoo Tours should be at the top of your list.