Grassology is advertised as a low maintenance grass seed which has been pitched on television by spokesman Bob Vila. Does Grassology work as advertised?

Bob Vila lends his face and reputation to the product in commercials which have been running for over a year. The official website is grassology.com, which was registered in January 2007. The domain getgrassology.com has also been used in advertising, although that now forwards to grassology.com.

How much does Grassology cost? 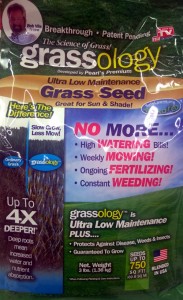 As of this writing, Grassology is available in stores. I found a three-pound bag of Grassology at a local KMart’s As Seen on TV section for $19.99 in June 2014. This bag (right) covers up to 750 square feet.

Below is the label for the the Grassology seed mix I obtained. As you can see, it contains several fescues: 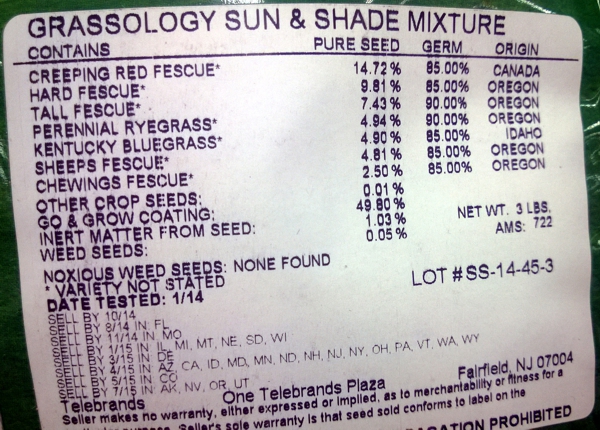 I’m not sure if the mix above is unique to my area of the desert southwest, or if this is what they use in all bags sold around the country. Let me know in the comments below if you’ve seen a different mix on your package of Grassology.

The website states that germination can take as little as 5 to 7 days, up to two weeks or more.

What the Grassology advertising claims

I have yet to see results with Grassology, but there are existing reviews online which do not lend much confidence in the product. Consider:

Some recent reviews on Amazon have included less than impressive headlines, such as:

To be fair, there are also some 5-star reviews, with headlines such as “Mine worked fine.”

One possible reason why Grassology has worked for some but not others is due to the type of grass used in a variety of locations by consumers who are attempting to grow it. Spring and Fall are the best times to sow Grassology. The website also implies that those who sow Grassology deeper than a quarter inch may not see germination at all. A soil temperature of 60 and 70 F is also ideal.

The manufacturer launched the website grassologysuccess.com which is aimed at helping consumers get the most out of Grassology.

Another notable item about Grassology is that it does require regular watering. Those who do not properly care for Grassology may have disappointing results.

The television commercial for Grassology notes that it is the original seed blend developed by Pearl’s Premium. You can obtain a five-pound bag of that seed direct at pearlspremium.com for about $36. When I located the two seed mixes posted online by Pearl’s Premium – the Sunny Mix and Shade Mix – neither were the same as the seed mix I found on the bag above. Similar, but not identical. Grassology is not specific about which Pearl’s Premium blend upon which it is based.

Pearl’s Premium also touts many of the same characteristics as Grassology, such as drought resistance, slow growing, deep-rooted, etc.

Pearl’s Premium is also available at Walmart. A 5-pound bag there is about $43.

Aside from complaints that the grass seed hasn’t worked for some customers, there are many reviewers who felt the ordering process was confusing, with more orders received than wanted. Because Grassology and competing products are easily found locally, consumers should opt for this route to avoid shipping problems.

This is a commonly-seen television commercial for Grassology featuring Bob Vila.

A great lawn can make a house look like a home, adding value to your property, and it’s fun for the whole family. Hi, Bob Vila here, with a breakthrough in grass seed that can give you great green grass. It’s called Grassology. It’s grass seed based on science that’s guaranteed to give you great green grass. And once it’s established you’ll quickly begin to see a gorgeous green lawn that’s virtually maintenance free.

Grassology is patent pending and it’s the original low-maintenance seed blend developed by Pearl’s Premium. You’ve probably seen it in the news. You see, regular grass requires frequent watering and fertilizing, but Grassology’s roots extend four times deeper than ordinary grass to reach the good stuff that’s underground like water and nutrients. And the best part, Grassology reaches a dwarf height so there’s a lot less mowing, guaranteed. With Grassology you’ll have more time to enjoy your lawn.

Check this out, that’s the Grassology difference. We’ve all seen bare patches, bald spots or brown spots caused by pets. Try Grassology, it naturally fights disease, insects, even weeds, so you have a lawn that looks like a fairway. No one mowed this lawn in months. Check out the Grassology difference after a harsh drought. If your lawn isn’t thicker, fuller, and greener in 60 days, you’ll get your money back. And best of all, it’s made right here in the USA.

Despite the bold claims in the television advertising, there are alternatives to Grassology available, such as the Scotts Turf Builder series of grass seeds that has generally positive ratings from Lowe’s and Home Depot customers. Cost-wise, a three pound bag of Scotts Turf Builder Tall Fescue Mix Grass Seed at Home Depot, for example, is about $13.50. There is also Pearl’s Premium, mentioned above, which is said to be the basis of Grassology.

The Google Trends chart below shows search volume on Grassology over the past 2 years. There was a significant surge in the Spring of 2014, with a tapering off over the next few months. Grassology has been seen advertising on fringe cable channels in 2015, presumably as they gear up for Spring of this year.

Grassology has been met with mixed reviews, and online orders of the product are plagued by shipping costs and delays. If you want to try Grassology, you may be better off picking it up locally, and examining alternatives in the process. As far as grass seed goes, Grassology doesn’t appear to be as revolutionary as the advertising implies, and the consumer is still required to care for the grass in order for it to grow properly.

Have you used Grassology? Tell me of your experience in the comments below.

You may be interested in this comparison of Grassology with Cutting Edge Grass Seed and Hydro Mousse Liquid Lawn.