As an As Seen on TV product aficionado (which I probably shouldn't admit), I tend to stay abreast of the up-and-coming products, or those in the testing phase. While brainless spots such as Sham-Wow and Life Alert come to mind, I have to wonder if Harry the Happy Birthday Hyena may be the dumbest of them all.

The ad begins with a gloomy black and white explanation that “birthdays are supposed to be fun.” We see adults and children opening boring gifts such as socks and pajamas.

I should point out that voice over actor for this spot puts those shouty Billy Mays types to shame, at least in the ability to annoy viewers. He sounds like a bad Chuck E. Cheese impersonator trying a little too hard to be cute. You can hear this same voice in quite a few other television ads for As Seen on TV products marketed to children, such as Amazing Tank.

So then we are informed that birthdays don’t have to be boring because of Harry the Happy Birthday Hyena. “Just give him a squeeze and the party is on.”

Cut to one of the most disturbingly annoying laughs you may have ever heard. Tickle Me Elmo sounds downright song-like next to this hideous laugh. Harry laughs the entire birthday song, which must seem like an eternity.

Cut to a familiar As Seen on TV tactic of completely over-exaggerated acting, as a group of adults break into extreme laughter the moment Harry is pulled out of a bag (note that Harry hadn’t even started laughing yet – he’s that funny). 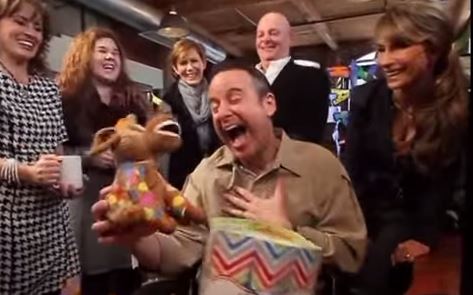 Suddenly all of our original black-and-white parties have come alive in brilliant color, complete with happy faces – all thanks to Harry.

We are then shown Harry as the centerpiece of several adult parties. 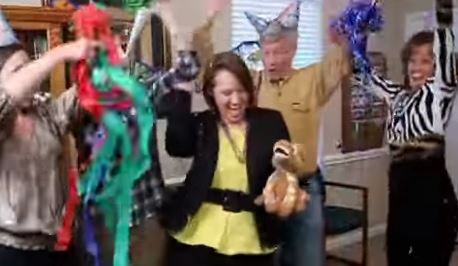 So at this point, the 2-minute spot isn’t even half over and they’ve pretty much told us everything they can about the product: it’s a stuffed animal that laughs the birthday song while its head moves. Now they have to fill the next 1:15 with repetition and filler.

More black and white scenes… “Another dull birthday? No problem!”

Cut to more party scenes with Harry as the centerpiece. 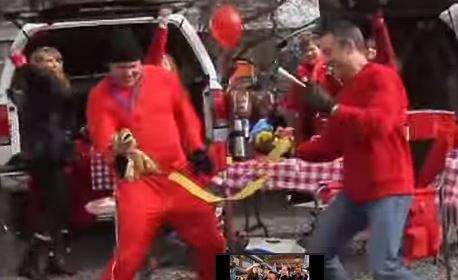 What are these people even doing anyway?

Alas, it doesn’t seem Harry will ever see the light of day. According to its official website, buyharry.com, the product is no longer available – and it doesn’t look like it was ever for sale at all.

The marketing for this product sought to solve a problem that never existed in the first place: boring birthday parties. What kid thinks birthdays are boring?

What do you think is the dumbest television ad of all time?