About that Tummy Tuck Belt Commercial

I still can’t get out of my head that impressive moment in the infomercial for Tummy Tuck Belt when they show a before and after “heat vision” of a person who donned the “slimming system.” The marketing gurus behind the Tummy Tuck Belt were quite convincing in “proving” that the belt plus the “acceleration cream” actually kept your belly warm for hours after wearing it – prompting fat to disappear without effort. 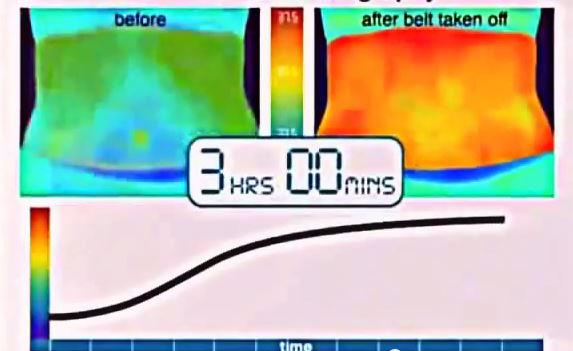 And then I tried it for myself. But before I get to that, let’s look a little closer at what Tummy Tuck Belt allegedly does.

What the Tummy Tuck Belt Claims

The “system” offers “three ways to slim your belly.” 1. Keep your lifestyle: Just wear the belt and “gradually” slim away belly fat. 2. Combine with exercise: Add exercise to your daily regimen, in addition to wearing the belt. 3. Instant results: Basically, it can be used as a girdle. I will concede that #3 above does work. Of course so does Spanx or any other girdle. And that’s not why you’re buying the Tummy Tuck Belt. You want to put that sucker on for 10 minutes a day and end up with a six-pack. And while we’re at it, #2 – adding exercise – may work without the belt, too. It only stands to reason that exercising more is likely to help you lose weight. So that leaves us with #1, which states you can lose weight by simply wearing the belt for 10 minutes a day. The commercial doesn’t say much about their “accelerator cream” which I’ll touch more on later – and that’s actually a major point of contention for me. If you scroll way down to the bottom of tummytuckbelt.com, you’ll find a disclaimer with the assertion that typical results are a 1″ loss around the waist after 30 days:

They also point out that “clinical scenes” on the website were “recreated by volunteers.” But what is their evidence that strapping on a belt for 10 minutes a day can actually lose an inch in 30 days? They claim it came in a joint study, but will not divulge which universities conducted the studies. When contacted by wafflesatnoon.com, Tummy Tuck’s customer service said they were not allowed to disclose the names of the universities. What I’m hearing is, “You can’t see the studies, but trust us – the belts worked. Now… buy our products.”

Fortunately, I didn’t have to trust them, as I had an opportunity to test the belt out for myself.  You can read my full review here. In short, the belt worked about as well as wearing a shirt for me. It did nothing.

A quick note about “before and after” photos

It has been pretty well established that before and after photos can be faked quite easily. Not only can this be achieved with Photoshop, but there are countless videos on YouTube which show amazing before and after photos which were done naturally in a matter of hours. These are achieved by flexing or relaxing muscles, sucking in – or sticking out – one’s stomach, lighting, etc. Not convinced? Check out the video below to see for yourself.

Another point to mention, which I elaborate on in my first review, is that I had a strange sense that the Tummy Tuck Belt was almost a front for selling unwanted subscriptions to their accelerator cream. That’s because you buy the belt once for about $50, but they want you to buy the cream every month for about $20 a pop. Despite a spate of negative reviews, you still see the Tummy Tuck Belt advertising online and on television. I have to wonder how long it will be before the Federal Trade Commission weighs in on the Tummy Tuck Belt’s claims, as they did with other “slimming belts” back in 2002.

For me, the belt simply did nothing except work as a girdle, and that’s not how the Tummy Tuck Belt is primarily advertised. Have you used this belt? Tell me about it.