Delano Las Vegas is the $80 million renovation to Mandalay Bay's THEhotel. I recently had an opportunity to stay in one of the preview suites that provide a glimpse of the new Delano Las Vegas rooms. Here is my review of a corner King Suite at the Delano Las Vegas.

I spent two days at the Delano Las Vegas in July 2014. Although the property was still officially THEhotel – and in to Delano Las Vegas – I was fortunate enough to stay in one of the newly renovated preview rooms which will be standard for Delano guests when the official relaunch occurs in the Fall of 2014. The property will be a throwback to the much smaller Delano hotel in Miami Beach.

I stayed at the Delano with the intent of posting this review for potential Delano guests after the official opening in September. Below are my observations of each area of the large king suite.

As you enter the room, you step into a short hallway leading into the living area. There is a small half bathroom immediately as you enter. This includes a toilet and sink. 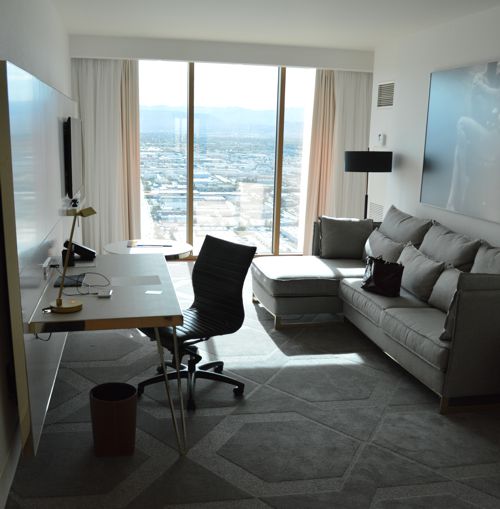 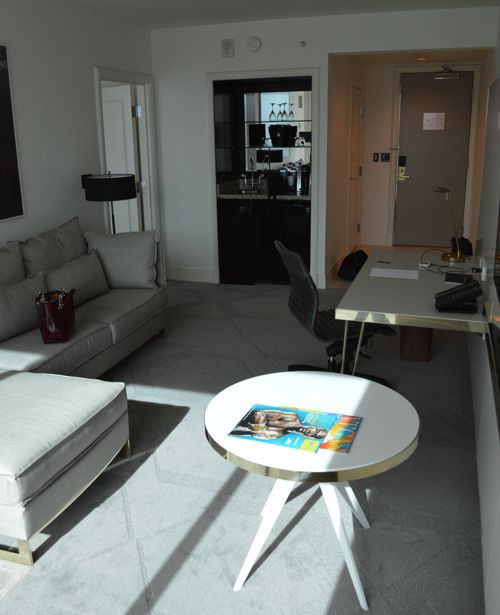 The living area includes a couch, desk, small table, and two end tables. There is a fully-stocked wet bar that is said to have “personal storage space.” In the photo below you can see the small “personal” area is big enough for a few sodas to lay flat. 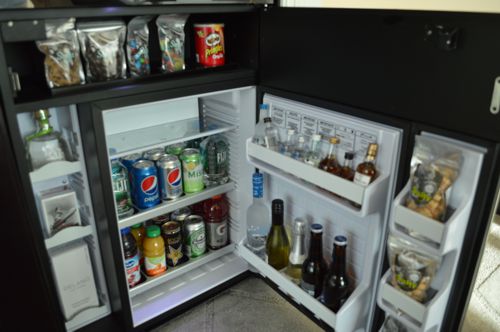 The desk includes a bank of electronic inputs, such as HDMI and USB charger.

The windows in Delano run from the floor to the ceiling. At the bottom of each window is a lever which allows you to let fresh air in from outside. With the air outside at about 110 degrees, I opted not to leave this lever open very long, but I found it to be an interesting feature.

Because the windows went all the way to the floor, this allowed my wife and I to sit right next to the bedroom window, peering down at the ground below. At 37 floors up, had a great view of the city, overlooking the Luxor pool next door, and the I-15 freeway behind that. It was a tranquil setting and a beautiful view.

I stayed in a corner room on the 37th floor (room 917). The view from this corner room is more panoramic than can be found in the standard rooms, as you can see in the photo below. 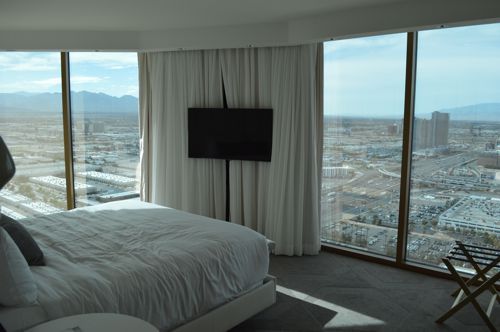 In the bedroom you’ll find a king-sized bed, armoire, and bench at the foot of the bed. This is also where you’ll gain entrance to the main bathroom. Non-corner rooms include an entertainment center facing the bed. 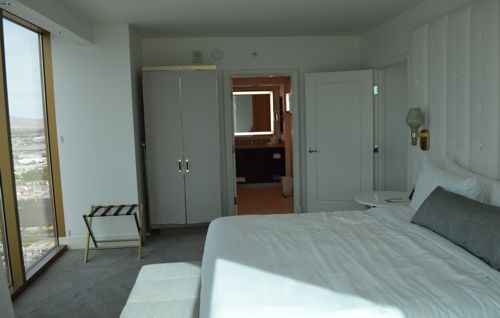 I found the pillows to be unusually hard and uncomfortable. My friend who is a chiropractor stayed in a similar room and also complained about the pillows. When I mentioned this to the staff, I was told that additional pillows could be found in the armoire. The bed has a thick mattress and large, soft headboard.

My friend stayed in a non-corner room, and his view wasn’t nearly as spectacular as mine. I recommend requesting a corner room for the view alone.

The spacious bathroom includes dual sinks, several lighted mirrors, his-and-her robes, tub, and separate shower. I liked the flat screen TV in the bathroom, which was surprisingly useful. The toilet is in a separate room. Below the sinks you can find an assortment of supplies, such as wash cloths, hair dryer, and slippers. 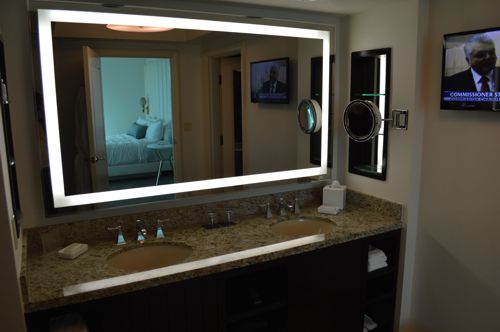 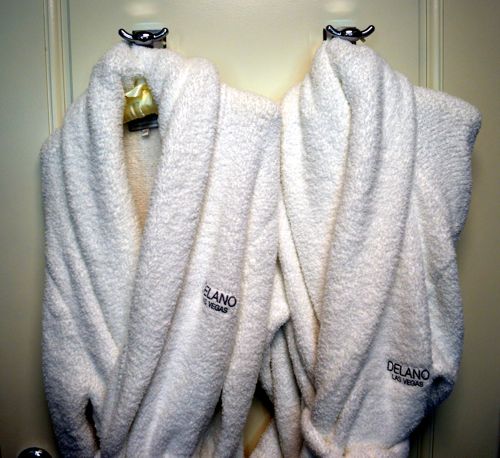 There is a retro hexagon theme in the carpeting and half bathroom walls. Some of the furniture has gold trim, which one friend described as “kind of 80’s looking,” but I personally did not find it to look dated. The main bath is adorned with marble and granite. Over the couch in my room was a large photo of a man and a woman in a swimming pool.

Perhaps an obvious perk with staying at Delano Las Vegas is that it is part of the Mandalay Bay, which allows you access to all of its features – namely the pool, nightclub, and Foundation Room lounge. You also get all of the expected amenities, such as access to casino, shops, and food or coffee establishments.

If you’re walking back to your room from the pool, you may want to cover up. I saw security telling several women in bathing suits to put something on when entering the casino area.

As a guest to a “preview suite,” I had a letter waiting for me on the desk from Matthew Chilton, General Manager of Delano Las Vegas. The letter stated, in part:

“Congratulations on being one of the first to experience our preview suites. Your newly redesigned room is just a peek of what is to come. We are proud to unveil this all-new suite boutique hotel offering, premiering this fall, that will bring the effortless style and unparalleled service of the original Delano South Beach to the energy and buzz of the Las Vegas Strip.”

The king suite at Delano Las Vegas is a large 725-square foot room, spacious enough to avoid that cramped hotel feel you get in standard hotel rooms. I felt the cost was more than reasonable based on the size of the room and the spectacular view. The decor, comfort, and quiet led to an overall pleasant experience. My only complaint was that the pillows were extremely hard and uncomfortable.

I highly recommend a corner room for its extra view, unless you don’t feel that the armoire would supply sufficient storage for your needs.

Delano Las Vegas is set to officially launch in September 2014.