Today I offer my review of the The Cervantes Hotel (also referred to as "Chateau Cervantes" or just "Cervantes") located in Old San Juan, Puerto Rico.

I spent a few days on the West Coast of Puerto Rico prior to my stay at The Cervantes. Prior to checking in, I had mentioned where I was staying to some locals around the island – and none had heard of the hotel, which I thought was odd. I had referred to it as “Chateau Cervantes” because that’s how it was described by other reviewers online. It appears that the hotel no longer uses the word “Chateau” in its name, simply going by “The Cervantes.”

Once I arrived and saw how small it was, I realized why it wasn’t a household name on the island. I would describe it as a mini-hotel, rather than a large chain type of accommodation. That doesn’t mean, however, that anything is lacking. It is a full-service hotel serving a small number of guests, and does so quite well. A worker there told me that there were only 12 rooms.

Below are some of the pros an cons I noted during my stay in January 2015:

Perhaps one “pro” which should not go unnoticed is that the checkout time for the hotel is noon. Some internet sites listed the checkout as 11am, but this was not accurate as of January 2015.

The friendly staff met me with a smile and warm greeting whenever I entered the property. And they always seemed to go out of their way for their guests. On one occasion, for example, I found that I needed adhesive tape. The woman at the desk gave me hers and told me to just bring it back when I was done. It’s a small gesture, but reflects the nature of the staff. When I checked in, the man at the desk didn’t just give us a key – he took us to our room and showed us around.

When we wanted to go out and see the nightlife of Old San Juan, the girl at the desk pulled out a map and told us where we could find the most happening spots. The day I was set to check out, I asked if I could check out late – and they accommodated my request without charging me anything extra. I also had some time to kill between checking out and arriving at my cruise ship, and the staff allowed me to store my luggage there until it was time to leave.

I accidentally left an expensive pair of headphones in my room and called to see if I could pick them up when my cruise ship returned to port. A week later, I showed up to the hotel, and my headphones – along with another item I didn’t realize I had left – were there waiting for me.

The first thing we noticed was the wonderful smell in the room. Perhaps it’s a small point, but makes a good first impression. There was a bottle of water and a bucket of ice waiting for us as we entered. The room sported a clean and modern design, and my wife and I both felt the bed and pillows were quite comfortable. The room’s “windows” are just shutters which allow you to lean out and look at the city.

Unlike the hotels in Vegas to which I’m accustomed, the shower at The Cervantes took a minute or two to warm up. Once it warmed up, the temperature remained constant, although the pressure changed slightly on occasion. It has a hand-held head you can hold, or place in its stand. The bathroom was well-stocked with shampoo, conditioner, soap, and even a shower cap. 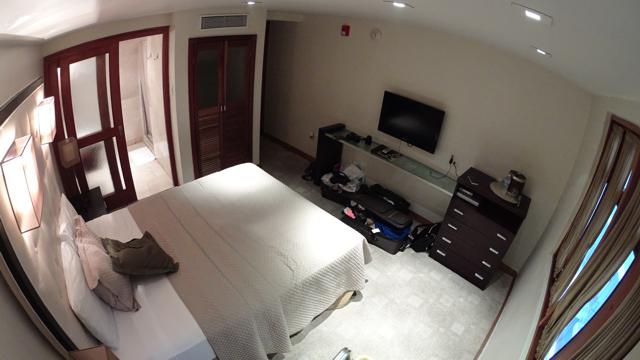 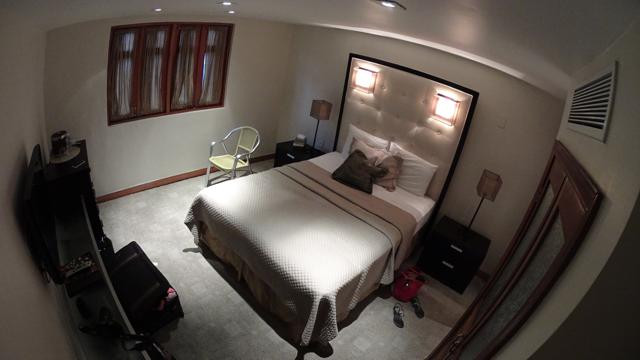 The Cervantes sits among a row of restaurants across from a parking garage in Old San Juan. Although it is an uphill walk to almost everything, the fact that it resides toward the edge of Old San Juan felt like a pro to me. Other nearby necessities (for some) include a parking garage across the street, Starbucks, frozen yogurt, and ATM at First Bank half a block away.

Note: I took three different cab rides to this hotel. None of the cab drivers immediately knew the name of the hotel when I mentioned it. I finally figured out that if I told them it was by the parking garage, Starbucks, and the frozen yogurt place then they knew where to go. They seemed to know it only as “The Cervantes” and not the older “Chateau Cervantes” name.

The video below provides a quick tour of the room reviewed here.

With a full sized dresser, two 2-drawer night stands, closet with iron and ironing board, there is no shortage of storage space here.

In order to make any review as complete as possible, I always attempt to look for any potential negatives, even if my experience (such as that at The Cervantes) was positive. Below are the only areas I could think of which could be of some concern to future guests:

Even when closed, the “windows” sounded open. Sounds in the alley below did not seem blocked or muffled at all, so people shouting or sounds of men working were very prominent, even up on the fifth floor. 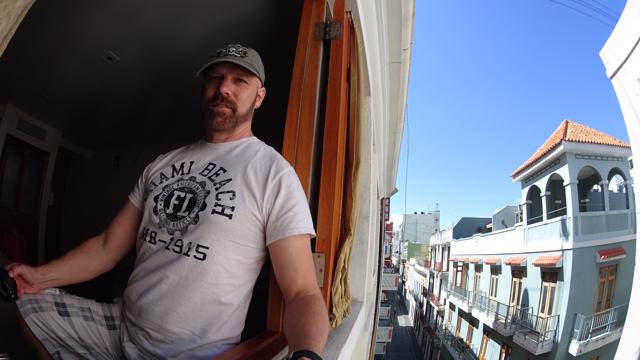 The windows are great to lean out and see the city, but they don’t keep the sound out.

The view from the room isn’t of a major street, but of an alley next to the frozen yogurt shop – and there isn’t much to see. That said, the architecture of Old San Juan – even if just a back alley – is still cherished by some.

The username and password they gave me didn’t work. Had I needed to access the internet, I would have pressed the issue, but I did not ask, so I can’t comment on the speed available to guests. The fact that they didn’t give me incorrect login information is why I list it as a con here.

Although I found the bathroom to be modern, clean, and comfortable, there were two small points of contention I felt worth mentioning here. The bathroom door is opaque glass and does not provide a strong sense of privacy. My wife sitting on the bed a few feet away, for example, would be able to see a blurry version of me sitting on the toilet. Perhaps one other small point is that there is no bathroom fan, but that is certainly not a deal-breaker. 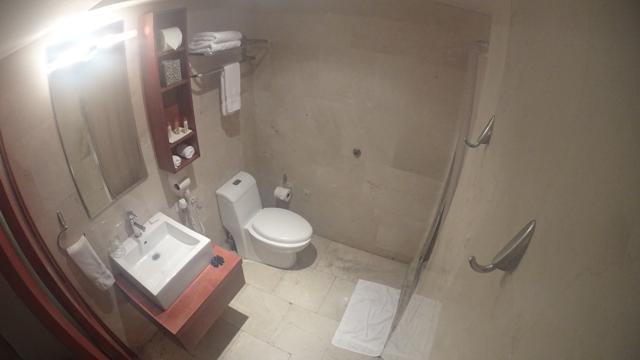 The bathroom is simple but clean and well-stocked.

There are two other features worth mentioning which don’t quite fall into the “pro” or “con” categories above. First, there is no pool at this location. That was not a problem for me, but some guests may want to know this before booking. Second, there is a continental breakfast available to guests. Although I did not partake, I did go downstairs to take a look at what was being served. The offerings were pretty light, and I opted to run next door to Starbucks instead. Several guests, however, seemed content with the breakfast offerings.

I spoke with several other guests staying at The Cervantes, and all of them expressed satisfaction with the hotel. I would not hesitate to stay at this hotel again. The few minor cons listed above are heavily outweighed by the pros, most of which are the top notch staff, location, and a clean and comfortable room.

The Cervantes offers guests the benefit and attention of a small hotel without sacrificing anything offered by its larger counterparts.