Today I offer my review and observations of a toy called Hover Ball, an indoor toy which glides across the floor when kicked.

Hover Ball is a toy by Wham-O which glides across the floor and allows for a safer way to play “ball” indoors. The “ball” is actually more of a hemisphere with the appearance of a half-soccer ball on one side, and a smooth surface on the other. It glides (it doesn’t actually “hover”) across the floor via “Super Slider Technology” and is available in three colors: blue, green, and pink. The ball is said to work on carpet, tile, or wood and its soft material is designed to avoid bumps and scratches on walls or furniture.

The official website is hoverball.com, which was first registered back in 2000. The website at the time did not sell the current product advertised today. The current Hover Ball product appeared on that domain in late 2013.

Hover Ball is now widely available in stores. They have been spotted in displays at stores such as Walmart, Target, and Toys R Us. 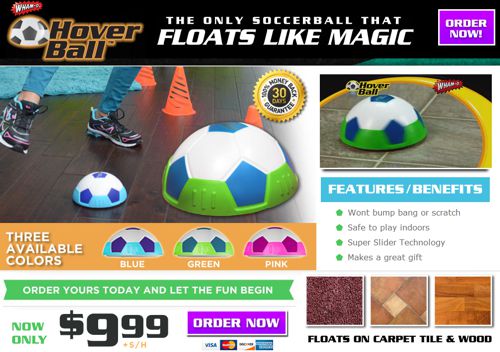 How much does Hover Ball cost?

When purchasing from the official website, Hoverball costs $9.99 plus $5.99 shipping for a total cost of $15.98. There is a 60-day money back guarantee, less shipping.

Originally Hover Ball sold for $14.99, but this price has since been reduced.

Hover Ball can be found in stores such as Walmart and Toys R Us for about $10.

While the website and advertising for Hover Ball use the terms “hover,” “float,” and “slide” to describe the product, it seems that “slide” is the most accurate word in terms of how the toy works. There are no photos of the bottom of the toy on the website, but there are glimpses in the television commercial which show it to be a smooth piece of plastic. The product does not use batteries, and thus does not actually use power to “hover.” It does, however, slide quite well on a variety of surfaces, although thicker carpeting may prevent Hover Ball from traveling as far as smoother surfaces. Shorter carpeting such as berber seems to work very well.

The size of Hover Ball may throw some consumers off, as it is only about 6 inches in diameter. Closeup photos of the product may lead some people to believe it is larger.

In my tests of the product, I found it to perform about on par with what is depicted in the television commercials. It glides very well across tile and short carpeting. The replay value of it will ultimately depend on your child. This also may be an obvious observation, but Hover Ball is meant to be used as a soccer ball, not as a football, basketball, or baseball.

While the design of the ball itself takes furniture and wall into consideration, children playing with the ball indoors may not. Even though your baseboards should be safe, you may still be faced with rambunctious children running around the house playing with this toy.

Hoverball is similar to another product called the Air Power Soccer Disc which is about $15. That toy actually hovers, and moves similar to that of an air hockey puck. It is powered by a motorized disc which creates a “curtain of air.” No such technology is employed by the Hover Ball.

There is another product available at Toys R Us called “Hover Soccer” which appears to work similarly to the Air Power Soccer Disc, but is for table-top use only (essentially air hockey without a special table). That retails for about $12.

After my initial review of Hover Ball was posted in July 2014, the product appears to have had a renewed advertising campaign, as evidenced in the Google Trends chart below, which shows a massive uptick in November 2014 and again toward the 2015 holidays.

Hoverball is limited by its size and the fact that it slides rather than hovers. It does allow children to play a certain amount of “ball” games indoors. I would say the product performs generally as advertised, except for the hover-vs-sliding terminology.

If you are looking for a true “hover” ball, you may want to look into the Air Power Soccer Disc, which only costs about $5 more than the Hover Ball.

If, however, you would prefer a toy that doesn’t require batteries, and don’t mind a “sliding” toy rather than a true hovering one, Hover Ball may be the right choice for you. Now that it is readily available, I suggest picking it up at a local store, which will also give you a chance to see it in person before purchasing.

Reviews around the internet are rather positive, giving it about a 4-star rating across the board.

I will keep mine on hand for rainy days.

Have you used Hover Ball? Give me your observations in the comments below.