Little Live Pets became widely available in August 2014. Originally there were two types of pets available: butterflies and birds. An owl and baby were later added.

The official website is littlelivepets.com, which was registered in February 2014. The product is marketed by Moose Enterprise, which also markets such products as Beados, and Micro Chargers. It is recommended for children age 5 and up. 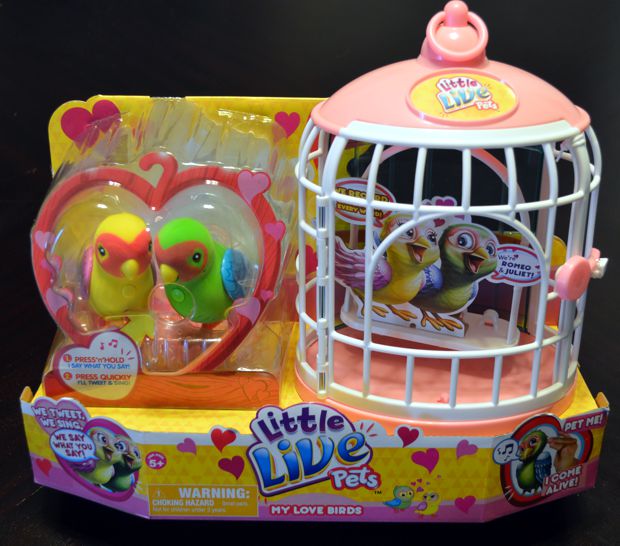 There 8 original designs of birds include: Angelic Angela, Delicate Dee, Cheeky Charlie, Silly Billie, Sweet Sophie, Cool Cookie, Friendly Frankie, and Beauty Bella. It appears that as of March 2015, there is a second series of birds and butterflies available, denoted “S2” on the website.

The product is made in China.

It is claimed that petting the toy bird will prompt it to sing more often, “The more you pet, the more I sing!” There are 30 different bird calls with several popular songs. Each bird also features voice recording and playback, in addition to the bird calls.

The official Little Live Pets website advertises the product as being available at Toys R Us, Walmart, and Target. When I first wrote this review in August 2014, I could not find it at my local Target, but it was available at a local Toys R Us. The first series appears to be more widely available now, although it is unclear how widely distributed the second series is at this time.

The bird “refills” (single bird packs) were about $10, while the single butterfly was about $15. The full Butterfly House was about $25.

I picked up a Little Live Pets birdcage at a local Toys R Us. I opted for the $30 cage (named “My Love Birds”) which included two birds, green and yellow. Below are my observations about the product’s various features.

The product comes with temporary batteries for the “try me” feature. It is recommended that you replace these with two standard AAA batteries. You’ll need a small screwdriver to replace the batteries. You also may need a pair of scissors to open the packaging.

Those of us who often skip the instructions may not figure out the recording process right away. To record with your Little Live Pet bird, you must press and hold the button until the bird chirps. Then speak up to 10 seconds. The bird will play back your recording in a higher pitch. A quick press of the button will play back your last message. Turning the bird off will not erase the last message.

You may have to tell your child not to pause when speaking. If there is a pause in your speech during the recording, the bird will stop and immediately play back. In other words, you can record up to ten seconds of continuous sound. Any pauses in sound will stop the recording process.

If you leave the birds on, they will randomly chirp. They will also occasionally play your last recorded message.

The birds are said to have a feature which will make them chirp if you pet them. “Gently stroke its back and it will tweet for you,” the instructions state. “Continue petting and your bird will get happier and chirp and tweet longer, and eventually whistle a tune!” It does not appear that stroking the bird will immediately launch it into song, but rather makes the bird more active, which increases the chance it will sing a full song.

The bird’s beak opens and closes whenever it chirps or plays back a voice recording. The two-bird pack I purchased included a yellow and a green bird. The green bird seemed more responsive than the yellow bird – usually chirping the moment I put my hand on it. The yellow bird, however, seems to chirp less often. I tried swapping batteries, but that didn’t make much difference. Perhaps the “personality” of the yellow bird is simply quieter than its green counterpart?

If you don’t touch your birds, they chirp less and less until the unit turns off after 30 minutes. The birds have a somewhat fuzzy “velvet” texture, and they feel well-constructed.

You can place your birds in the birdcage by sliding their feet into a slotted perch. It would appear that the birdcage is more for storage or display, as once the birds are in the cage, it is not ideal for playing with them. Even pushing the button while they are in the cage is not easy, as they reside on a swinging perch. You’ll want to add and remove the birds from the perch after you’ve removed the perch from the cage. The perch is easily removed or placed in the cage by a hook. 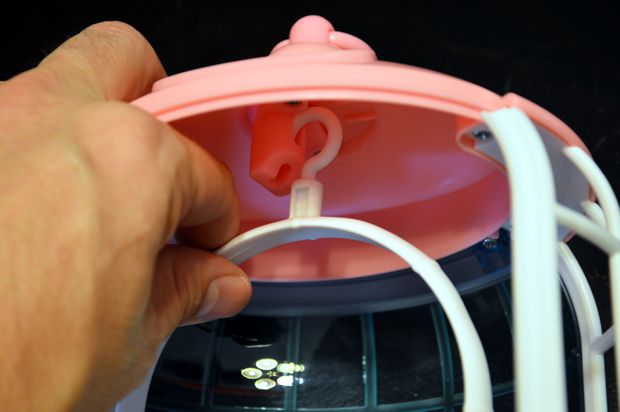 A minor point of contention is about the “collect them all” slogan. Although the consumer is encouraged to collect all designs of the birds, my packaging did not tell me which birds I had just purchased. The back of the box shows eight birds, but the website at the time stated there were six. Perhaps the two in the cage are not counted, but this still did not tell me what the names of the birds in my box were.

The website still shows all of the bird varieties available, but I did not see any names or descriptions of them.

I had several girls play with the Little Live Pets birds, and their initial reaction was curious and excited. The recording and playback feature is what initially dominated their playtime.

Admittedly, my teenage son and I had some fun with the recording feature, laughing at some of our high-pitched goofy sayings repeated by the birds. I was also amused by the reaction of my pets, especially my Golden Retriever, who apparently wanted to eat the green one. 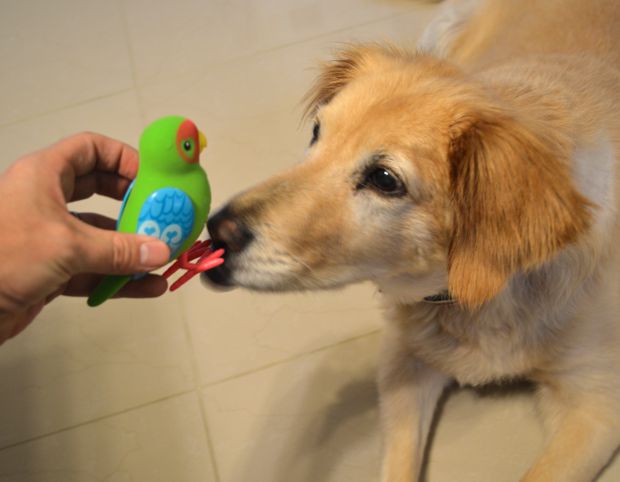 Little Live Pets is a line of realistic pet toys which move and make sounds. The birds are well-constructed and work as advertised. How well they hold a child’s attention over the long run will likely vary from person to person.

If you are only interested in the bird without a cage, keep in mind that you can purchase a single bird for about $10, which may be an inexpensive way to test out Little Live Pets.

You may be interested in my review of Digibirds, which is a similar toy bird product which came out around the same time.

Have you purchased Little Live Pets birds? Let me hear from you in the comments below.