Today I'm giving my observations and review of a product called Touch Purse, which allows you to use your smartphone without removing it from the purse.

Touch Purse is advertised as a way to safely store your smart phone for easy retrieval in a compact and useful purse. The official website is touchpurse.com, which was registered in December 2013.  It is marketed by Spark Innovators, which also offers such products as Cafe Cup and Rocky Mountain Knife.

A product tagline states, “Make calls & use your phone from inside the purse!” Touch Purse is available in brown or black. Below is a screen shot of the official website, taken in June 2014. 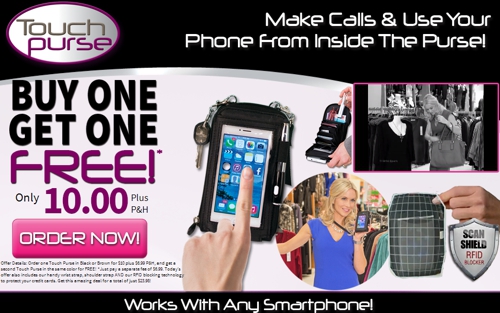 How much does Touch Purse cost?

Touch Purse costs $10 plus $6.99 shipping. You can add another purse for an additional $6.99 shipping, but you can opt out of this second purse offer, as I did. Note that the television commercial currently on the Spark Innovators YouTube channel (below) has a price of $12.99, which is no longer the correct price. There is a 30-day money back guarantee, less shipping.

When you place your order, you will be offered a series of upgrades and additions to your order. You’ll be asked if you want to upgrade to their deluxe model for an additional $8.99 per purse.

Upgrade every purse ordered to stain-resistant, ultra-durable nylon with stainless steel zippers and buttons plus FREE P&H on your entire order for just an additional $8.99 per Touch Purse ordered.

After I declined, I received another offer to upgrade.

Wait! You don’t want to miss this incredible offer! Upgrade every purse ordered to to stain-resistant, ultra-durable nylon with stainless steel zippers and buttons plus FREE P&H on your entire order for just an additional $6.99 per Touch Purse ordered.

The 3-in-1 LumaStylus fits right in the stylus loop already built into every Touch Purse. It features a pen, touch-screen stylus as well as a convenient and bright LED light! At only $5 each with FREE processing and handling, you can’t miss this deal.

Below is a television commercial for Touch Purse. I have seen this commercial airing on the Esquire channel.

After receiving my Touch Purse, below are my observations of the product.

There is a similar purse currently on the market called PursePlus Touch by Charm 14. That product was featured on QVC earlier this year. It has somewhat positive reviews on Amazon, but a YouTube review claims it is cheaply made. When I receive my Touch Purse, I will be considering the complaints and praise directed at this alternative product to see if any of the perceived flaws exist in Touch Purse as well.

Touch Purse is a new product which claims to allow users to operate their smart phones without removing it from the purse. I found the construction to be acceptable and it is possible to operate your phone while it is still in the pouch. Problematic areas with Touch Purse include the inability to operate buttons on the side of the phone and larger phones which do not fit into the slot.

If you have tried Touch Purse, let me hear from you in the comments below.