Twist A Plug is an As Seen on TV outlet adapter which allows cords to be rotated in order to more easily accommodate different plugs and adapters.

About Twist A Plug

Twist A Plug is a new As Seen on TV product in 2015. It is marketed by APG, which has brought such products as Catch Caddy and Juggle Bubbles to the market. This adapter provides four outlets which can be rotated 360 degrees, which is said to eliminate the problems associated with using multiple bulky adapters in the same space.

The official product website is twistaplug.com, which was registered in January 2015. 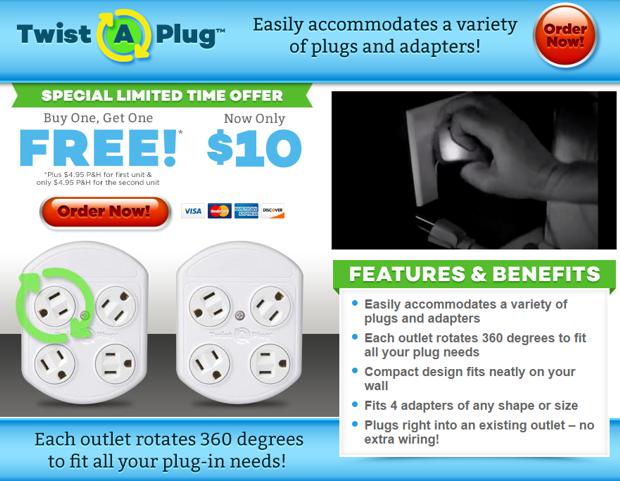 Twistaplug.com as seen in April 2015.

What Twist A Plug Claims

What Twist A Plug Costs

As of April 2015, Twist A Plug is not yet available in stores.

This is a brand new product, and finding information on it is virtually impossible. Based on the lack of information and small number of times it has been advertised on television, it is safe to assume that Twist A Plug is being test marketed by As Seen on TV giant APG.

A couple of years ago APG advertised another electrical outlet product, the Side Socket. That swiveling outlet adapter can still be found in stores, and I still use it myself. Whereas the Side Socket provided a solution to outlets behind furniture, the Twist A Plug attempts to answer the problem of multiple bulky adapters using the same outlet.

Keep in mind that early reviews for As Seen on TV products new to the market tend to focus on slow shipping. It’s almost a certainty to happen with this product as well. When products are first advertised, the first batch of shipments are notoriously slow. Once those shipping concerns are alleviated, you will then find reviews from consumers who actually tried the product. Due to the simplicity of Twist A Plug, I am speculating that reviews for it will be positive by first-hand reviewers.

My only concern about Twist A Plug, which I have not yet discovered, is if it is UL Listed. UL, or Underwriters Laboratories, provides a listing for certified products which meet certain safety standards. When I receive the product, I will inspect the packaging to see if this certification is noted.

Twist A Plug is a new As Seen on TV product which solves the problem of using multiple bulky adapters in the same outlet. Although reviews for it are virtually non-existent, its simple design – and a similar product by the same company which I still use – leads me to believe that it should work as advertised and will eventually sport mostly positive reviews. Keep in mind that new As Seen on TV products are often plagued with slow shipping in their first production run, and that could be the case here.

Have you ordered or used Twist A Plug? Give me your thoughts on the product in the comments below.