Catch Caddy is an As Seen on TV product designed to prevent items from falling between car seats. Today I present my review after evaluating the product.

Catch Caddy is said to fit “most” vehicles and can be installed be either sliding it into place, or pressed down into position. It is inserted between the seat and console with the idea of catching any dropped items that may otherwise fall below the seat. It is a flexible, cupped piece of plastic which measures about 14.5 inches long by about 4.25 inches high. 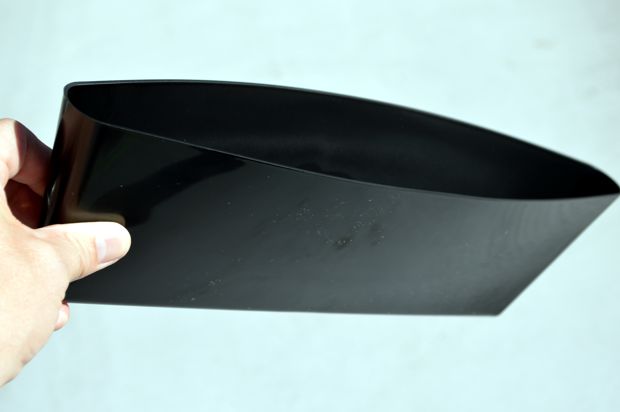 The official website is catchcaddy.com, which was registered in December 2013.

How much does Catch Caddy cost?

In Stores: Catch Caddy is now available in stores. I have seen it here in the Las Vegas area for about $13 to $16 for a box of two. I purchased it at as As Seen on TV store at a local mall for $15.99. While this is more expensive per piece, purchasing locally avoids shipping delays and non-refundable shipping costs. 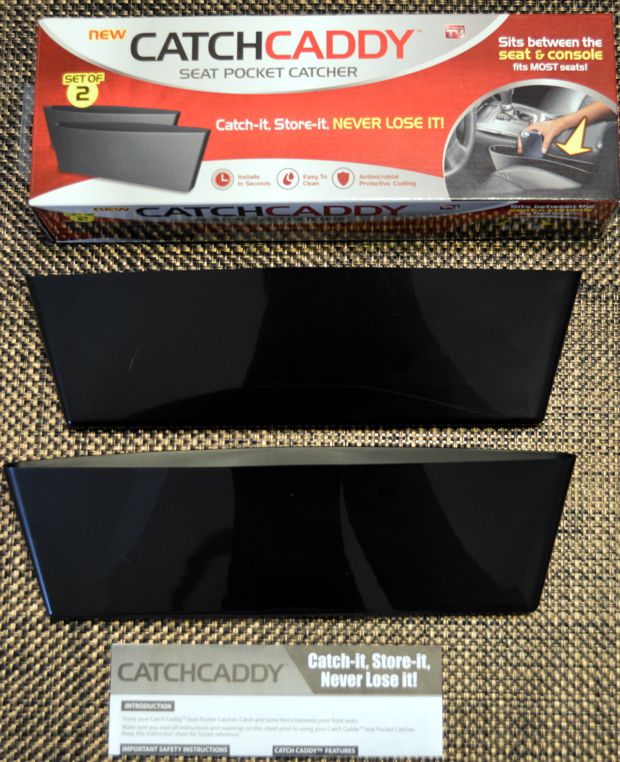 The design of Catch Caddy is quite simple: A cupped, flexible piece of plastic which slides between the seat and console. To properly evaluate Catch Caddy, I performed a series of tests with three different vehicles: A compact 4-door sedan (Ford Focus), a compact roadster (Mercedes SLK), and a Hyundai Santa Fe.

For my first test, I performed two “coin drop” tests for each car. For this test, I held 12 coins in my hand, and poured them over the opening where Catch Caddy resided. Below are the results.

In my first test with the Ford Focus, 4 landed in the Catch Caddy, while the remaining 8 coins landed elsewhere (the seat, by the parking brake, cup holder, and to the floor below).

In the second test, 7 coins landed in the Catch Caddy, while the remaining five landed in other locations. 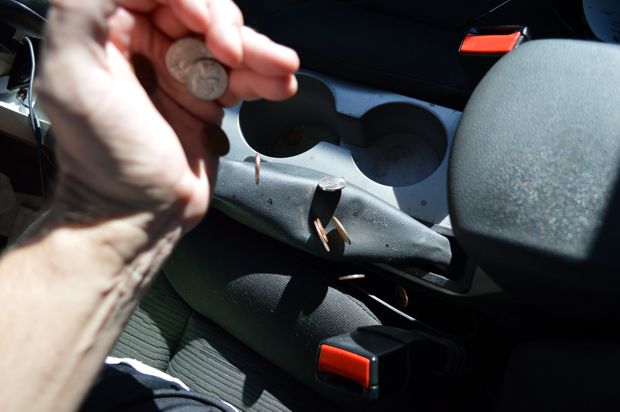 In the same tests on a Mercedes, the first test found 9 of 12 coins in the Catch Caddy, while the second test saw 11 of 12 coins being caught. It became apparent at this point that Catch Caddy is better suited to some cars more than others.

My final two tests were in a 2011 Hyundai Santa Fe. In the first test, the Catch Caddy nabbed 6 coins, while in the second test it stopped 8 coins from falling to the floor below.

I tried dropping an assortment of other items between the seats with Catch Caddy in place. Several of the larger items, such as cell phones, did not always fall into the product, but instead came to rest on top of it due to the small opening. This is still perhaps better than having it fall between the seats.

Accessing the contents of Catch Caddy

Whether you’re using Catch Caddy for storage or as a way to prevent items from slipping between your seats, at some point you’ll need to access its contents. Because Catch Caddy squeezes into place, it may not be easy to reach into it to retrieve an item if your car has only a small gap to fill. This means that to get to the contents, it is more likely that you will have to remove the Catch Caddy, retrieve the item, and then put the product back into place between the seats.

As you can see in the photo below, the space is not large enough in some cars to insert one’s hand. The caddy in the photo below holds a pen and a quarter, which were easiest to retrieve by removing the Catch Caddy completely. 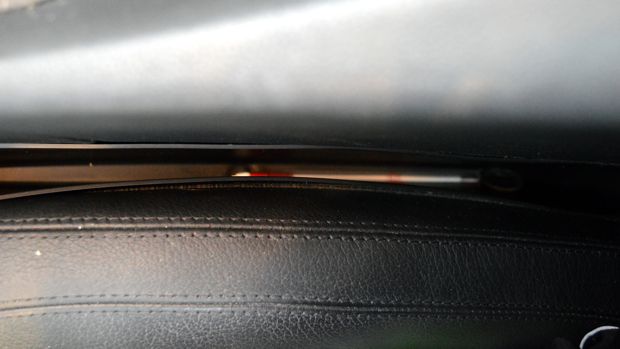 Most Catch Caddy reviews online are written by those who have not actually used the product first-hand, while many of the reader complaints revolve around the billing and shipping processes. Some consumers who didn’t notice the fine print believed they were ordering two Catch Caddies, while they were actually ordering two sets of two. These shipping and billing concerns can be negated by simply purchasing the product locally.

I was surprised that Catch Caddy successfully squeezed into some of the tighter spaces, although this creates a very small opening which would not actually catch larger objects. It does, however fill the gap even if it doesn’t catch everything.

Because Catch Caddy is made of plastic, rinsing it off in the sink is the easiest way to clean it. The directions advise against using it in the dishwasher.

The design of some seats may prevent Catch Caddy from completley closing the gap. In the Mercedes tests, I noticed that the gap between the Catch Caddy and the seat widened slightly toward the back, as seen in the photo below. 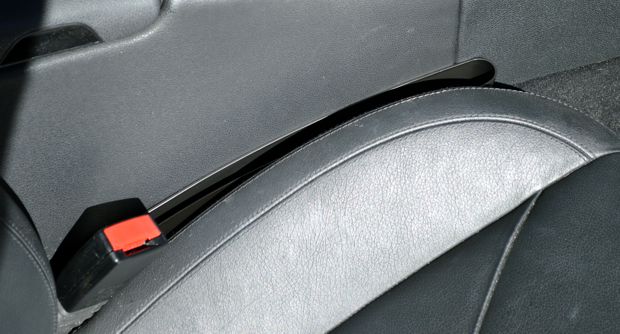 After about 2 weeks residing in the same location in the Mercedes (pictured above), I found that Catch Caddy had warped into the shape it had held during those two weeks. The end of my coin test video above shows this warped effect. I believe this would only be a problem if you wanted to use Catch Caddy in a larger opening immediately after it had been warped. Over time, the Catch Caddy slowly returned to its original shape. It may have warped as a result of extreme summer heat in my desert location.

There is a product called Drop Stop, which was featured on the hit television show Shark Tank. That product is designed to block the gap between the seat and console, rather than as a pocket to catch items.

On vehicles with small gaps between the seat and console, however, Catch Caddy works more as a block than a pocket, so in those cases it would be similar to Drop Stop.

Catch Caddy is a simple As Seen on TV product designed to prevent objects from falling between car seats. In my tests, I found that it did not catch 100% of dropped objects, but it did catch or stop a majority of items. How well the product works for storage will likely depend on the gap available in your vehicle.

It will also depend on the consumer to determine if the cost is worth two pieces of flexible plastic.

Have you used Catch Caddy? Tell me what you thought in the comments below.