Review of Micro Knife 180, a modernized version of the pocket knife which folds into the shape of a credit card and can be conveniently stored in a wallet.

Marketed as a next-generation pocket knife, Micro Knife 180 is a lightweight (13 grams) waterproof cutting tool which folds into the shape of a credit card. It is claimed to be thinner than two credits cards, or about the width of a nickel. The knife can supposedly fit into the credit card pockets of a standard wallet. Micro Knife’s handle is made of polypropylene while the 2.5″ blade is composed of surgical steel.

Below are recent screen shots of the Micro Knife website from November and December 2014. 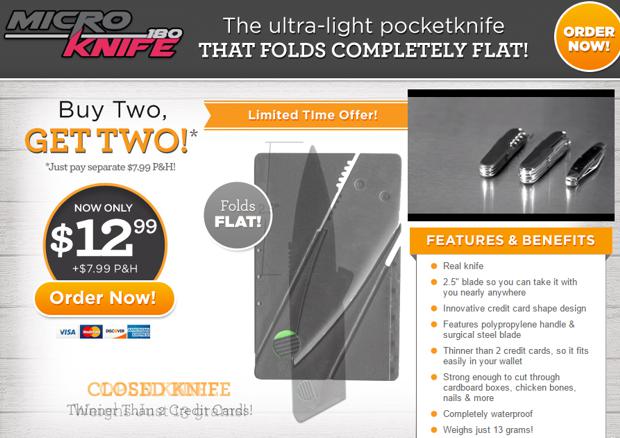 The Micro Knife 180 website can be found at getmicroknife.com, which was registered in February 2014.

How Much Does Micro Knife 180 Cost?

The original commercial stated that Micro Knife 180 was $10 plus processing and handling (P&H), but the product website currently lists the price as $12.99 plus a P&H fee of $7.99. On the order page, there is an option to get an extra Micro Knife for a separate $7.99 fee. There are also options to order 2-3 sets of Micro Knives, each with the option to get an extra. The ordering process has a confusing set of options and add-ons, and it would be easy to accidentally order several unwanted knives, so I’ve broken it down in bullet points below:

As you can see, there are a number of options, ranging from $22 to $87, so choose carefully! According to the product website, state tax is also added to orders from CT, NJ, NV, NY, and PA.

In addition, the Micro Knife 180 website offers a sixty day limited warranty which repairs or replaces knives that are defective upon arrival. However, the warranty states that if a knife or knives is defective and requires repair or replacement, the customer must pay a fee of $7.99 per knife for P&H.

The television commercial below has been airing since May 2014.

Below is a transcript of the Micro Knife commercial. Note that this version still lists the price as $10:

Pocket knives haven’t changed in decades, they’re bulky and have small blades, but what are your options?

Finally, there’s a modern version of the Swiss Army Knife.

The secret is the surgical steel blade that instantly transforms from an ultra thin credit card shape into a professional cutting tool measuring a full 2.5 inches in length.

The super strong polypropylene handle will give you a lifetime of folding while the precision blade will slice through everything in its path.

The Micro Knife is strong enough to cut through this football, and yet its only 2 millimeters thick. That’s about the same as a nickel, making it small enough to fit into the thinnest wallets.

Finally a real knife you can take with you anywhere, and look, it’s completely waterproof, so dirt and water just whisk away.

Keep on in your purse, and another in the tackle box.

Anywhere you need a professional blade, the Micro Knife will be there, and when the work is done, simply fold it up and slip it into your wallet.

So stop wasting your money on bulky knives that just don’t cut it, because that’s not a knife, that’s a knife.

Upgrade to the next generation of pocket knives, the Micro Knife!

A second knife is perfect for household crafts, and slicing food in the kitchen. That’s right, you get two Micro Knives for just $10. This special offer is not available in stores, so order now!

Although searches for “Micro Knife” on Google Trends go back to 2006, it is unclear if “micro knife” is just a generic search term for small knives or if a version of this product has existed since then. As one can see, the Google Trends report below shows steady searches with small surges going back to 2006, and a huge surge of interest in November of 2014, which peaked in December 2014, followed by a significant decline in early 2015.

Scouring the internet for Micro Knife 180 reviews reveals little information. The lack of reviews and 2014 website registration date leads me to believe that the Micro Knife is a relatively new product, but the name has obviously had other uses since 2006.

I’d be interested to know how solid and durable the construction is, specifically in relation to the way it folds. The few reviews from customers who have actually tried it tend to compare it to a standard pocket knife, which in the minds of many is not justified by the cost of this product.

One review site mentioned that Micro Knife is black and may be difficult to see in low light. This seems to be a valid concern. I can imagine working in a darkened environment, setting the knife down, and then having difficulty locating it when it is needed again.

The market has other similarly styled mini knives, so it may be worth comparing pricing and durability to analogous products. Granted, it seems that Micro Knife 180 is mainly available through online ordering, and a hands-on evaluation may not be possible due to this without ordering the product.

I will update this page when I am able to give Micro Knife 180 a hands-on evaluation.

There are several “fit in your wallet” tools which have come to the marketplace in recent months. Consider the Wallet Ninja, which I reviewed back in early 2014. Wallet Ninja claims to offer 18 tools in a credit card sized product. An Amazon search of “credit card pocket tool” also yields many inexpensive options of varying designs and prices, many which are quite similar to Micro Knife and Wallet Ninja.

Micro Knife 180 is advertised as a contemporary adaptation of the pocket knife. It is a small, thin, and lightweight knife that folds into a rectangular credit card shape which can be stored in a wallet. It is available to order online, yet appears to be comparable to other miniature knives on the market. Since the product appears to be fairly new, there are not currently many reviews of Micro Knife 180 on the internet. I will be updating with hands-on info in the near future.

There are many other credit card sized tools available in stores and online, and it would pay to shop around before making a decision to purchase Micro Knife 180.

Have you tried Micro Knife 180?  Tell me what you think in the comments below.