Light Up Links are light-up toys which allow children to construct a vast array of creations from their imaginations. Below are my observations about the product.

About Light Up Links

Light up Links is a kit for children which allows them to build creations from their imaginations. It includes light up and glowing pieces to enhance the enjoyment of the product.

The official website is lightuplinks.com, which was registered in October 2013. The product is brought to you by Product Trend, LLC, which is also behind such products as WaxVac and Wraptastic. You may want to peruse its BBB rating and complaints.

A product tagline is “First you think and then you link.”

Light Up Links cost $19.99 plus $6.99 shipping. A second set is offered for an additional $6.99, but you can opt out of this second set. There is a 30-day money back guarantee, minus shipping. It is not yet available in stores.

Below is a screenshot of the official website, taken in July 2014. 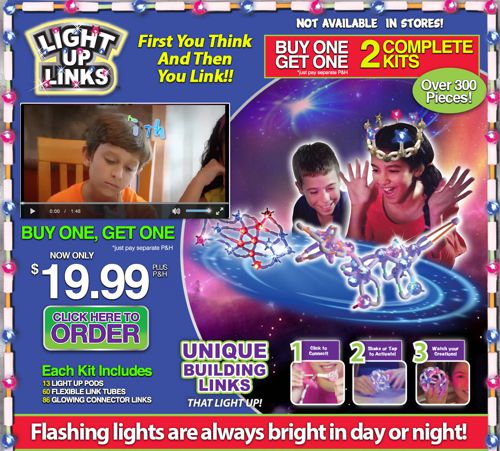 Below is a television commercial for Light Up Links which has been airing since late 2013:

Ironically, the “links” on this product do not light up. The ball connectors, called “pods” actually generate light, while the connectors glow in the dark. This toy is probably best compared to products such as LEGO, Tinker Toys, or Lincoln Logs. It allows a child room to create whatever their imagination can construct, and includes the “light up” feature which may enhance its appeal to many children.

One item of note is that the balls must be shaken to activate the light-up feature. In some cases, you may see children pounding their creation on the table to get it to light up. On more elaborate creations, it may take some effort to get all of the pods to light up at the same time. This does not seem to be problematic in the eyes of children who use the product, but may be for their parents.

One common question regarding this product is its long-term appeal, and unfortunately there is no single answer for all children. Just as some children will play with Lincoln Logs for weeks on end, while others will quickly bore with the toy, the same can be said for Light Up Links.

The total number of pieces in the set is 300, which is sufficient to make a substantial creation.

My call to customer service

Perhaps my biggest item of concern with the product is the lack of information on the product’s website. There is no FAQ or additional information of any kind other than the little offered on the web page. Even the product’s customer service website, as of this writing, doesn’t work. So I decided to call the listed toll-free number to ask a question regarding batteries.

While the product is not advertised as needing batteries, it isn’t clear if there are actually non-replaceable batteries that will eventually die. I called the customer service line and asked about this concern, and my rep was not very helpful. When I asked if Light Up Links contained non-replaceable batteries that eventually wore out, she said, “Yeah, something like that.” She then stated that customers had reported that the product still worked “like it was new” after using it for “one to two years.” This seems unlikely given the fact that the product’s website has not even existed for a year as of this writing.

Other Light Up Links Reviews

Although the product has been advertising since late 2013, most of the reviews for Light Up Links that I’ve found online date from November and December of that year, with little to be found written since then. It would appear that the product may have had an initial advertising push before Christmas, and is being rolled out once again in mid-2014.

If your child loves toys like LEGOs or Tinker Toys, they are likely to enjoy Light Up Links. The product’s long-term appeal will depend on your child. I have yet to determine if the light-up mechanism is generated by non-replaceable batteries, and how long they will last if that is the case.

Have you used Light Up Links? Tell me your thoughts about the product in the comments below.