My review of the Micro Touch Max, an As Seen on TV all-in-one personal hair trimmer.

Micro Touch Max is a personal hair trimmer, advertised as an all-in-one solution for removing hair on the body and face. The unit takes a single AAA battery and comes with two comb attachments, a built-in light, and a cleaning brush.

The official website is microtouchmax.com, which was registered back in May 2010. The product is marketed by Idea Village, which has promoted several “Micro Touch” products, such as Micro Touch One razor and Micro Touch Switchblade. More recently they have advertised products such as Tough Blade featuring Brett Favre. Idea Village is also responsible for a variety of As Seen on TV products including Snackeez and the Stufz burger press.

In 2014, the website microtouchgrooming.com was used in some advertising. That domain was registered in August 2014, and features the product’s new spokesman, ex-NFL quarterback Brett Favre. As of 2015, that domain now forward to the Tough Blade product website.

How much does Micro Touch Max cost?

I recently spotted Micro Touch Max marked down for about $7, so it may pay to shop around. 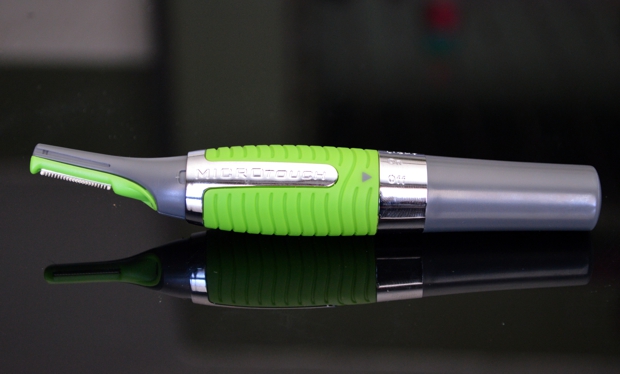 Below is the 2012 television commercial for Micro Touch Max.

I can’t say for sure what the man in the commercial is doing at the 5-second mark, but it looks like he is attempting to shave his ears with a disposable razor. The man’s exaggerated exasperation is the norm with these As Seen on TV commercials.

In 2014, Micro Touch Max re-appeared on the airwaves with football legend Brett Favre featured in the television commercial. Favre also now appears on the product’s website.

In the new commercial featuring Favre, Micro Touch Max is advertised as a product which can be purchased in stores, and the online ordering option is not mentioned. It is, however, still sold on the product website, despite that omission in the advertising.

I’ve tried out Micro Touch Max in a variety of capacities. Below are my observations.

Micro Touch Max is a good supplemental hair trimming accessory, but I wouldn’t say that it replaces all standard shaving or trimming tools. Ten months after initially writing this review, I still reach for Micro Touch Max for certain tasks, such as ears, beard line, and stray body hair.

Have you used Micro Touch Max? Let me hear from you in the comments below.