Here is my supplemental review of Secret Extensions, several months after initially evaluating the product with two testers.

Obvious disclaimer: Being a bald male, I did not try the product myself.

The domain secretextensions.com has been registered several times over the years and used for various products. It wasn’t until about January 2014 until the product we know as Secret Extensions could be found at this domain. Around that time, a YouTube channel was also created and the ubiquitous commercial featuring Daisy Fuentes was posted. Thus, it is safe to say that this product has only existed since about the beginning of 2014. The domain comprasecretextensions.com has been used in marketing on Spanish-language television.

On the official website, as of January 2016, the product costs about $52 when shipping is included. This breaks down to $39.99 for the extensions, $6.99 shipping for the first set and $4.99 for the set set. I finally saw Secret Extensions for sale in a local store in March 2015 for a price of $39.99. All shades were not initially available locally, however. It’s not uncommon to see expensive, real-hair extensions cost hundreds (or more) at a wig shop, so $47 is not unreasonable – as long as they look good. And thus we have the most important question: Do Secret Extensions look good and live up to the hype? 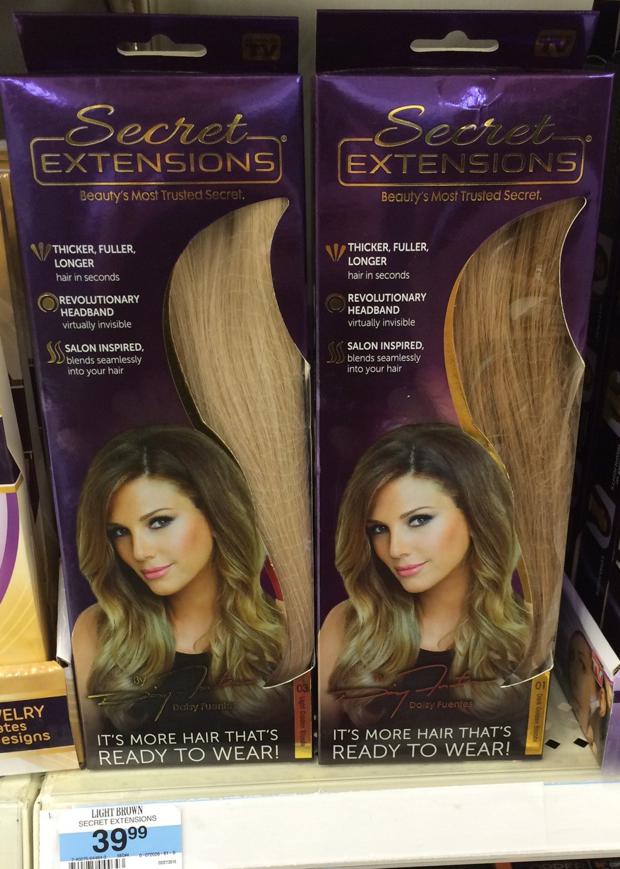 I finally spotted Secret Extensions at a Kmart in March 2015.

Our review over at wafflesatnoon.com was one of the first to evaluate the product, thus my testers were not influenced by opinions and reviews posted elsewhere online afterward. Commenters on wafflesatnoon and other review sites complained of slow shipping, especially those early comments in April and early May 2014. The number of complaints regarding slow shipping have since disappeared, so eventually the powers behind Secret Extensions finally caught up with the backlog of orders and shipping delays are no longer be a problem for most customers. Plus, they are readily available for purchase in stores, which eliminates shipping costs and delays.

Readers may be interested in several additional user comments posted to the Wafflesatnoon Lockerdome page.

One feature which we did not highlight fully in the original review was that of the return policy, which states: You can exchange or refund your order within 30 days as long as it has not been worn or removed from its clear package. It stands to reason that most customers will remove it from the packaging before deciding whether or not they want to keep it. I don’t return products I’ve purchased for evaluation, even if I find them completely useless after one use (GripGo comes to mind), but the average consumer may be put off by such a stiff policy.

That said, as someone who has accompanied women to wig shops for extensions here in Las Vegas, such a return policy is not outside the norm for this type of item. Most of the wig and beauty shops I’ve visited carry an All Sales Final policy for extensions due to the personal nature of the product.

Although an all sales final policy may seem acceptable in person, it may not bode well to customers who purchased Secret Extensions online, and then waited for two months or more – only to find that they were not satisfied with the product.

Several commenters have said that they placed Secret Extensions for sale on Ebay after deciding they did not want to keep the product but could not return it.

The two testers who evaluated the product found it to be an acceptable product, although not necessarily a replacement for more expensive real-hair extensions. After the initial tests, I asked them continue using the product and report back to me with additional observations after 8 weeks. Below are some of their thoughts after two months.

Due to the strict return policy, and the inability to match the product with your own hair until after you’ve already purchased it, Secret Extensions could be seen as a gamble when purchasing online. Reviews are bound to be mixed, as those who get a good color or style match are bound to be satisfied, while those who are unhappy with the product may feel frustrated by the lengthy shipping process and strict return policy.

Secret Extension’s biggest downfalls are easily remedied by seeking it out in a local store and taking a closer look before purchasing.

If you’ve used Secret Extensions, drop me a comment below with your opinion of the product.