Here is my review of the Mr. Coffee Fresh Tea Iced Tea Maker after more than a year of use.

The following review is for the 2 quart “Fresh Tea” Iced Tea Maker by Mr. Coffee. The company also sells a larger 3 quart model, which I have not evaluated.

This iced tea maker brews 2 quarts of fresh iced tea in about 10 minutes. It offers an auto-shutoff feature and can brew tea bags or loose tea.

You can find this product in stores such as Target or Walmart for about $20. It is also available online at mrcoffee.com, or online retailers such as Amazon, also for about $20.

Mrcoffee.com also sells a replacement pitcher for about $13.

My Review and Observations

As stated above, my review is for the 2 quart (circular) iced tea maker, not the 3 quart (rectanguar) model. In fact, I have read somewhat unfavorable reviews of the 3 quart model. Even the customers at the official Mr. Coffee rate that model only 1.5 stars.

Fortunately, the 2 quart model has much higher ratings there, at 3.5 stars, and my own review below reflects a mostly positive opinion. Below are my observations on the product.

The process of brewing tea is rather straightforward. You fill the reservoir with water, then add ice to the pitcher. Next, you add the desired number of teabags to the steeping chamber, and cap it off with the lid. The pitcher and reservoir and placed together, and the power button is pushed. 10 minutes later, you will have a full pitcher of cold iced tea.

How many tea bags to use will probably require trial and error for each consumer, and will depend on personal tastes. I use 5 teabags, while I have read other reviewers who use more or less.

The instructions clearly state that the product is not dishwasher safe, yet I ran the pitcher and lids through the dishwasher many times without incident. Other reviewers have stated that they ran it in the dishwasher as well. Over time, my pitcher developed stains which I could not remove. 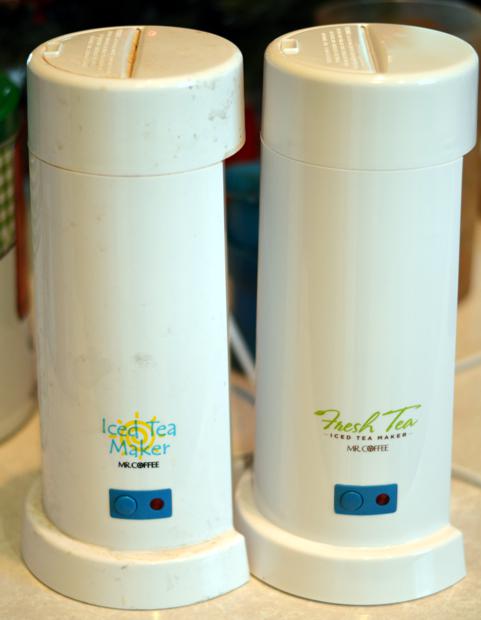 I obtained the earlier Mr. Coffee Iced Tea Maker in 2013 and used it for about 18 months. It performed quite well in that time, but there were occasional problems.

A few times, it leaked water all over the counter. On one occasion, this happened because the steeping chamber became blocked and water overflowed out of the pitcher. On another instance, the lever on the reservoir became stuck, which led to water coming out at an angle which did not enter the pitcher, but leaked down the side. I was able to remedy this by thoroughly cleaning the lever.

I found the pitcher to stain over time, even if I scrubbed it thoroughly with warm soapy water. It did not affect performance or taste, but one friend sarcastically asked me if I “ever washed that thing.”

My older iced tea maker was still working when I purchased the newer model, but I decided to replace it when the auto-shutoff started to malfunction. It began shutting off only a few moments into the brewing process, which forced me to continue re-starting the brewing process until it was complete.

Despite a few small problems, I found the Mr. Coffee Iced Tea Maker to be a worthwhile investment. If I can even get a year of use out of the product, I will consider it to be a great buy.

Have you used the Mr. Coffee Iced Tea Maker? Let me hear your thoughts in the comments below.