Perfect Slicer is advertised as a product which can slice large melons and fruit effortlessly. Does it work? Read my Perfect Slicer review and observations.

Perfect Slicer is advertised as a solution to the arduous task of cutting melons and other large fruit or vegetables. It works like a giant apple slicer, which is pressed down and is said to core and slice at the same time.

This product is not to be confused with another item known as “Perfect Slicer” which is used for cutting tomatoes, onions, etc between cupped slots. That product hit the market several years ago and is not related to this As Seen on TV slicer.

How much does Perfect Slicer Cost?

Perfect Slicer costs $14.99 plus $7.99 shipping. This television offer also includes a slicer mat. A second set can be added for another $7.99 shipping.

Shipping is expected to take 3 to 4 weeks.  There is a 30-day money back guarantee, minus shipping.

When I first evaluated this product back in mid-2014, Perfect Slicer was $10. At some point in late 2014, the price changed, as seen in the two screen shots below. 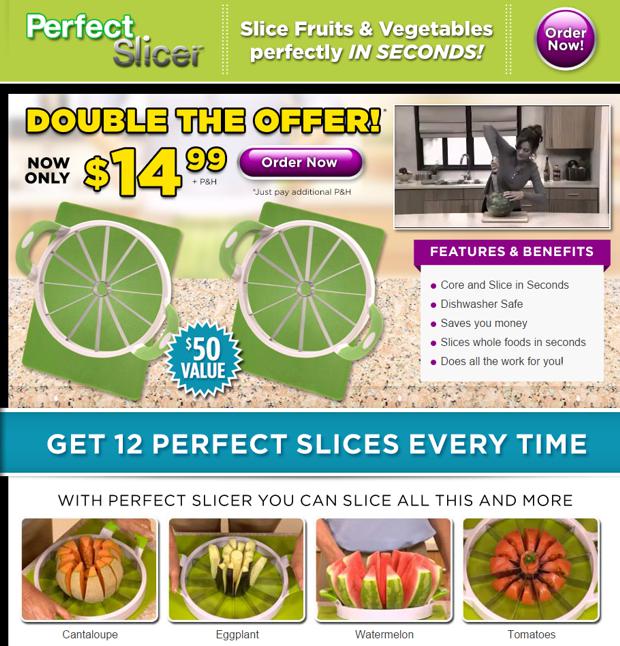 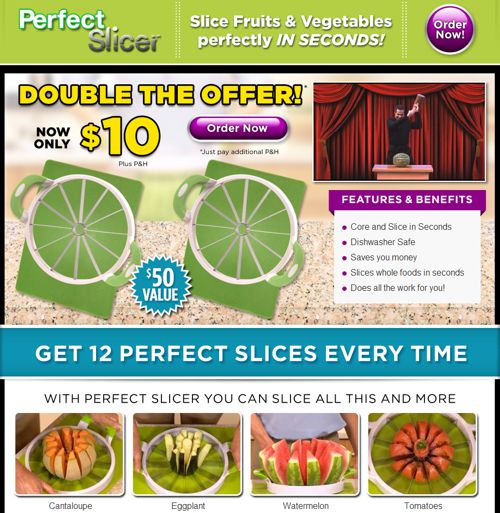 The official website is perfectslicer.com, which was registered in May 2014.

The television commercial below began running in mid-2014.

Those who wish to purchase Perfect Slicer may want to keep the following considerations in mind:

Perfect Slicer looks remarkably similar to another product called the Norpro Grip-EZ Melon Slicer. That product is available in stores for $15 to $20. While reviews for that product are generally positive, some commenters have pointed out that it is difficult to use on some items, such as watermelon. There is also a product called Melonslicer which looks similar.

The Google Trends chart below shows interest in Perfect Slicer picked up in mid-2014 and surged in early 2015.

Perfect Slicer is advertised as a way to cut large, difficult-to-slice melons and other fruit. It does appear that similar products are available in local stores, which means you could try a competing product without shipping delays or costs.

The product’s price changed from $10 to $14.99, and some early reviews may still reflect the old price.

Have you used Perfect Slicer? Give me your thoughts in the comments below.