Hideaway Pets are stuffed animals for children which can be rolled up and "hidden" away for easy storage. Read my Hideaway Pets review and observations.

Hideaway Pets is an As Seen on TV product marketed to children, often advertised during daytime television. The plush toy can be opened up for playtime, and curled up into a ball to “hide away” when not in use. There are seven designs available: Siberian Husky, Persian Kitten, African Lion, Snow Monkey, Lop Eared Bunny, Hedgehog, and Penguin. The toy closes via a snap, one on its head and one on the bottom.

A tagline for the product is, “Open up to play. Curl up and hide away.”

The official website is hideawaypets.com, which was registered in September 2013. Below is a screen shot of the product website, taken in July 2014. It remained unchanged as of November 2014. 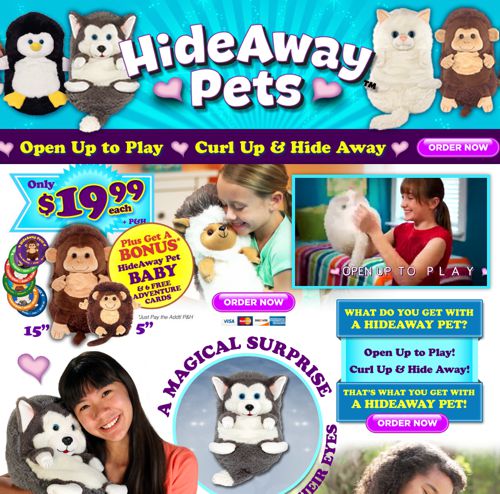 How much do Hideaway Pets Cost

Hideaway Pets cost $19.99 each plus $8.99 shipping for a total of $28.98. A 5-inch Hideaway Pet Baby and 6 adventure cards are added to your purchase, BUT these bonuses cost another $6.99 shipping, bringing your grand total to $35.97. I did not see a way to opt out of these bonuses. This means that to receive your Hideaway Pet plus a 5-inch mini pet and the 6 cards, you’ll end up paying  $15.98 in shipping. Should you decide that you don’t want to keep your Hideaway Pet, you can return it – minus the $15.98 shipping.

A common question is, “Are Hideaway Pets in Stores?” The answer is yes. They are readily available at retailers such as Toys R Us, Target, Kmart, and Walmart for about $20. Not all of the designs are currently available in stores, but the product’s Facebook page admins have said that more designs will be available in the Fall of 2014. 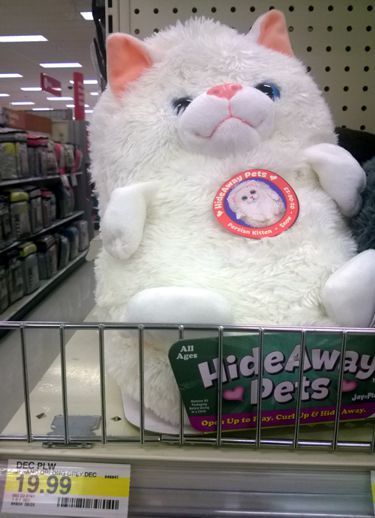 Below is a television commercial for Hideaway Pets which has been running during children’s programs in mid-2014.

I found a Siberian Husky Hideaway Pet at a local Walmart for about $18. It was in the As Seen on TV section, not the toy section. Aside from the product’s namesake feature, its ability to be “hid away,” I didn’t find much remarkable about the toy. It is of average quality and construction, but I will say that it is exceptionally soft. Some Hideaway Pets felt softer than others, which could simply be due to design differences among the various characters. This is another reason that buying locally will give you an advantage, as it will allow you to decide which stuffed animal you prefer. I gave it to a friend’s children to play with. They seemed to like it about as much as any other stuffed animal, and the novelty of the “hideaway” feature wore off quickly after the child opened and closed it a few times.

One minor point worth mentioning is that the website states there is, “A magical surprise… look into their eyes,” which led me to think there may have been something special about the pet’s eyes. There isn’t. It’s just a tagline taken from the jingle used in the commercial.

The commercials and website for Hideaway Pets mention a Jumbo pet. These are not available in stores, and it appears that the only way to get one is as an add-on via the website once you have already input your credit card information to order a regular Hideaway Pet. If you have obtained a jumbo Hideaway Pet, please give me your review of it below.

The Google Trends chart below shows the search history of Hideaway Pets. It appears that as of November 2014, the product is engaged in a heavy marketing campaign as the holidays approach.

Hideaway Pets are on par with the average stuffed animal marketed to children. The product’s biggest downfall includes the exorbitant shipping fees tacked on for paltry bonuses. The lack of an order confirmation screen feels to me like a deliberate way to mask the final shipping charges. Including a confirmation order screen would eliminate most of the complaints about Hideaway Pets, but it may also drive business away once customers see the true shipping fees, which some have described as “$15.98 for a $19.99 toy.”

Fortunately, these shipping delays and costs can be avoided by purchasing locally. I recommend going to a local store and examining one for yourself to see if you feel it is worth the price tag.

Have you used Hideaway Pets? Give me your review in the comments below.