Kyrobak is an electronic device which gives a passive motion massage that supposedly relieves back pain. Today I offer my observations on the product.

Kyrobak is an electronic device advertised as a way to deliver something similar to a chiropractic session which supposedly relieves mild to moderate lower back pain. According to the Kyrobak website, it can can used on almost any flat surface (floor, couch, and bed are mentioned). Using the product involves plugging in the device, positioning yourself on it, and activating the power button. It uses continuous passive motion and oscillation therapy to massage the pelvis area which is said to result in back pain relief.

Kyrobak is marketed as a device that will save time and money, implying that it may be an eventual replacement for drugs and chiropractic sessions. Weighing in at approximately 7 pounds and requiring no assembly, it is also announced as easy to use and store.

The Kyrobak website recommends at least 10 minutes of usage a day for it to be effective. The FAQ section of the website claims that it can be used up to 3 times a day, but warns that users should wait several hours between sessions. The FAQ also claims that it has a weight limit of 320 lbs., and is safe to use if one has a pacemaker. Kyrobak should not be used by pregnant women, and anyone under 18 should consult a physician before using the product.

Below are screenshots of the website from mid and late 2014, along with the 2015 incarnation. 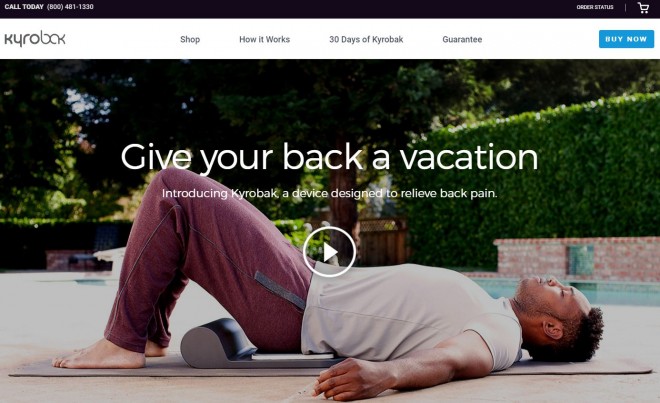 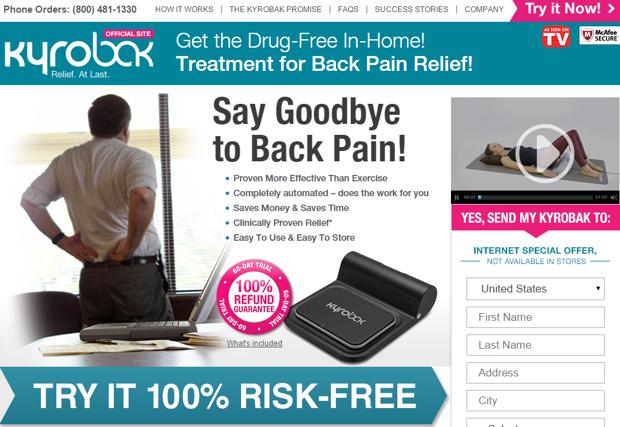 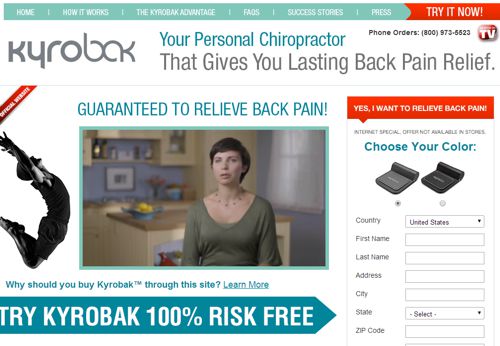 While searching for information on Kyrobak online, I noticed several people inquiring about the price. Originally, the price was not listed (or at least not easily found) on the Kyrobak website, which did not sit well with some potential customers. A Kyrobak representative fielding questions on their Facebook page (which is offline as of May 2016) did provide the price to followers there. Information on pricing was later added to the bottom of the Kyrobak webpage.

According to the representative on Facebook, Kyrobak can be purchased in one installment for a total of $299.95 plus $19.95 shipping for a total investment of $319.90.

Kyrobak also offers consumers a three-payment installment plan. Initially, customers are charged $99.99 plus a onetime shipping and handling charge of $19.95. 30 days later the client is charged an additional $99.98. A final charge arrives 60 days after purchase when customers are again charged $99.98. The three installments add up to $299.95 with the shipping and handling charge of $19.95, for a total of $319.90.

Kyrobak offers a one year manufacturer warranty and a triple guarantee return policy when purchasing directly from their website. They claim that they will refund the product price plus shipping and handling, and pay the return shipping if users are not satisfied after 45 days of usage. This offer, however, is not valid after 60 days. If you wish to return the unit before using for 45 days, Kyrobak will refund the product price, but the return shipping must be paid by the customer.

Below is an advertisement for Kyrobak which began running in late 2013.

Below is a transcript of a Kyrobak television commercial.

“It’s been amazing to understand how this concept really works.”

“It’s like having this, like, personal chiropractor to, you know, the motion that I’m used to when I go to a chiropractor.”

“It’s actually this way, how it does my back.”

“And my first thought is ooh, okay, there’s actually something happening. There’s some action here.”

“The movement, it’s so relaxing.”

“It rocks your, say from, back and forth, very gently.”

“And it’s a wonderful feeling.”

“The motion of it, you know, kneading back and forth.”

“It moves that region of my back that’s achey.”

“The wonderful thing about the Kyrobak is how simple the solution is.”

“And it’s amazing how much tension it can release in so short a short time, though. Ten minutes? That’s amazing to me.”

Below are a few factors of interested regarding Kyrobak which have been raised by consumers who are considering the product:

There is a Kyrobak pilot study posted on clinicaltrials.gov, a site run by the U.S. National Institute of Health. This site apparently posts studies with data provided by the sponsoring company, and the Kyrobak study was sponsored by Radiancy, Inc. Although the study was completed in December 2013, there are no study results posted. However, if one examines the study closely, it does say that 16 people used Kyrobak three times a day for 10 minutes for three weeks. These subjects rated their back pain using a numerical rating scale from 1 to 10 before and after the study. Under ‘Primary Outcome Measures,’ it is stated that, “Amount of pain determined by the NRS at the end of the 3-week treatment plan compared to baseline (before treatment)”. This seems to indicate that back pain did not increase or decrease among subjects after using Kyrobak for three weeks. The study can be viewed here.

This may be confusing to some readers investigating the product, as the Kyrobak Facebook page has a link to a different study that is supposedly associated with the peer-reviewed journal Physiotherapy. The results of that study showed that 36 people using Kyrobak for 10 minutes, three times a day, for three weeks experienced a significant reduction in back pain. The study contains a link to yet another study on clinicaltrials.gov. When one follows this link, however, it appears to be an earlier study from summer of 2012 for a product called the no!no!Back Continuous Passive Motion Device. Although the study was reportedly finished in February 2013, it is similar to the first study in that no study results are posted, and under ‘Primary Outcome Measures’ there is a statement claiming, “Change in pain level after 3 weeks compared to baseline (before treatment)”.

It appears that Kyrobak was originally meant to be marketed under another name. It is unclear why there is a discrepancy between the study in the journal Physiotherapy and the earlier study posted on clinicaltrials.gov.

Radiancy is perhaps best known for the hair removal product No!No! Pro. Thus, it appears, based on the early studies posted for Kyrobak, that it was originally planned to be marketed under the No!No! brand name.

The chart below shows interest in Kyrobak via Google searches. As you can see, the product’s advertising increased significantly in August 2014 and again in November 2014. There was a slight decline in interest in December 2014 and a slight uptick in April 2015. As of late 2015, the product is still occasionally advertised, but search interest has decreased dramatically.

Kyrobak is an electronic accessory that is advertised to relieve back pain through a continuous passive motion pelvic massage. The apparatus costs around $300 and can be ordered from the Kyrobak website.

Consulting a study linked from the Kyrobak Facebook page seems to indicate that it may relieve back pain over time. However, there appears to be a contradiction in results compared to the studies posted on clinicaltrials.gov.

If you have tried Kyrobak, please let me hear your thoughts in the comments below.