Cellucor's P6 Extreme is a popular supplement marketed as a natural testosterone booster. Here is a look at some of the potential side effects.

As I approach the end of a cycle of P6 Extreme, I wanted to preface my full review of the product with a list of possible side effects from my own experience and from others cited online.

You can read my full review of the product here.

P6 Extreme is said to be a natural testosterone booster. It is suggested that you take it for an 8-week cycle, and then stop taking it for 4 weeks. I am in the process of writing a longer review of the product as my 8-week cycle nears an end. Today, however, I am offering a preface to that review with some potential side effects reported for P6 Extreme. The official Cellucor website found here. 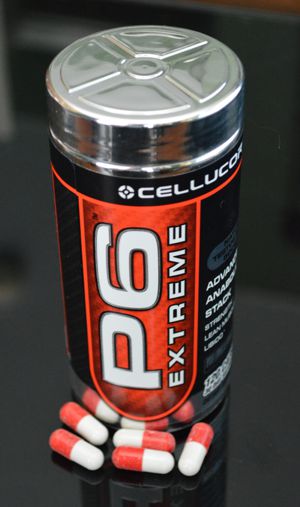 I went into a local GNC with the sole purpose of buying something to review – and decided to let the salesmen point the way. P6 Extreme was heavily touted by two salesmen behind the counter. They told me it was one of their hottest items, and the product was featured in a display next to the register. They claimed that it could lead to muscle gains as well as increased libido, and that customers had been reporting great success with the product. One of the salesmen told me he had used it for a full 8-week cycle and that his girlfriend liked what she saw when he was taking it.

I wasn’t sure if they pushed the product because they earn a commission on it (do they?) or if it really is one of their hottest sellers. With a price tag of $120, it’s certainly not in the price range for everyone. I took the bait with every intention of reviewing it here, and began taking it diligently.

As the salesman told me about muscle gains while using the product, I noted that I don’t currently lift heavy weights due to a recent shoulder injury. He said that the product would still help in a variety of ways.

My P6 Extreme Side Effects

All of the side effects above were minimal, and I did not experience them after the second week of taking the product.

Other Reported Side Effects

GNC readers give P6 Extreme generally favorable reviews, but a few reported aggression, irritability, and sleeplessness. The overall rating of the product on that site is 4 out of 5 stars.

I would like to reiterate that a list of side effects does not mean that the product doesn’t work, or that any/all side effects may be experienced by everyone. Based on the list above, it would appear that stomach upset would be the most likely possible side effect associated with the ingredients of P6 Extreme.

In comparison to other herbs and supplements, I believe that the side effects of P6 Extreme are rather mild and it can be taken on an empty stomach.

Although I did experience a few side effects when taking P6 Extreme, most of these occurred in the first week of taking the supplement. Perhaps my biggest concern about the product is the inclusion of bayberry extract, as that herb receives some rather upsetting warnings. The warnings associated with that ingredient would be sufficient to make me take pause regarding P6 Extreme.

Read my full review after using the product for 8 weeks here.

Have you experienced any side effects while taking P6 Extreme? Let me hear from you in the comments below.