BeActive Brace is a device which is advertised as a way to quickly relieve pain related to sciatica and other back conditions. This is my review.

This product is said to reduce short term and long term chronic back pain associated with sciatica. The leg brace slides up to a position just below the knee and applies “target pressure” to “the specific pressure point that provides sciatic and related back pain relief.” Standard sciatica braces offer support to the lower back area, but BeActive is said to offer “pressure point” compression and pain relief be being donned on one leg.

BeActive Brace was invented and patented by physical therapist Akiva Schmidman. The initial television commercial for the product was produced by “Infomercial Queen” Collette Liantonio and began running in the summer of 2014. It continues to run as of November 2015.

The official website is beactivebrace.com, although I have also seen beactivebracesale.com used in online advertising. Those domains were registered in February 2011 and June 2014 respectively. 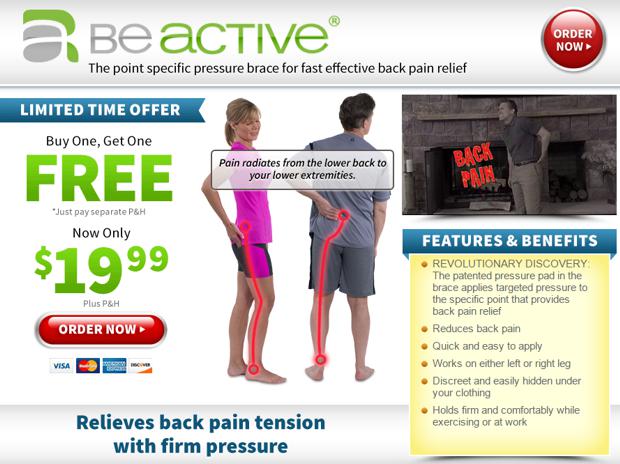 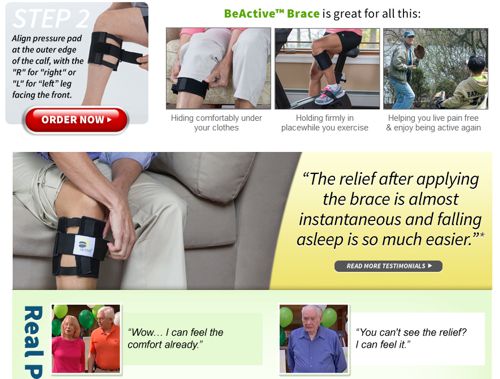 The BeActive website advertises the product as a simple and effective solution to sciatica.

Online: When purchasing online, BeActive Brace costs $19.99 plus $7.95 shipping for a total cost of $27.94, but you cannot just purchase one. This is because the product is currently sold in “sets” of “buy one, get one for additional shipping.” That means you will see a charge of another $7.95 for this “free” set, bringing your total to $35.89. You cannot opt out of this second set, and there is no confirmation screen to allow you to review your order before submitting your purchase. Some users have mistakenly purchased two sets, thinking they were only purchasing two braces, and were unhappy to see a final charge over $70 after the sale was final.

You’ll also be offered a chance to upgrade to their “Premium BeActive” for an additional $10. This premium product is said to be made with more “breathable and durable fabric.” I have not evaluated this product.

In Stores: BeActive Brace is widely available in stores, typically found in the As Seen on TV section. They sell for about $15. I first noticed it for sale at a local Bed Bath and Beyond in September 2014 (see below).

Below is an advertisement which has been running for BeActive brace in mid-2014. I have seen it as recently as 2015.

Is your back acting up again? Is lower back pain a daily drain? If you’re one of the millions who suffer from excruciating agony of lower back pain, you need BeActive, the revolutionary new acupressure system that instantly helps ease discomfort in your lower back, buttocks, and legs. Watch! Just slip on BeActive and tighten the strap. You’ll immediately begin experiencing instant relief! Back pain often radiates from the lower back to your lower extremities. But, apply BeActive to the trigger point below the knee for instant relief! The secret is the acupoint pressure pad that switches off the pain trigger that activates the lower back pain.

“BeActive applies firm pressure behind the knee on a specific pressure point which can help relieve the pain and suffering from sciatica.”

“I just put it on, but I can feel it already easing the pain.”

“But now I don’t feel the pain at all. This is really something!”

“It kind of feels like it’s relaxing that muscle.”

“I’m eight months pregnant, and I definitely wish I had found this a couple months ago.”

“Now I’m not going to give you this back now. Hahaha.”

BeActive gives you the ability to instantly be active again. Wear it while exercising. Bend down without pain, and keep up with the kids. So discrete it’s invisible under your clothing, yet so comfortable you can even sleep in it! BeActive easily adjusts to fit any leg so everyone can live pain free. Expensive pain-relievers wear off, but BeActive is always there to deliver the pain relief you need. Now, start living pain-free with the acupressure point therapy of BeActive for just ten dollars. But wait! Call now and we’ll double the offer free, just pay separate processing. If you don’t begin to get instant relief, send it back and owe nothing! You get it all for just ten dollars, so call or click now.

I don’t suffer from sciatica, but I have suffered from lower back pain for years, so I decided to give this product a try. This review involved my preliminary observations before I obtained the product. The observations below are based on my research regarding the product and its advertising. I posted a follow-up article after using BeActive, linked below.

It appears that BeActive began its advertising campaign in early June 2014. Most of the early complaints about BeActive involved the ordering process, particularly those consumers who did not realize that it was only sold in sets. Because there is no confirmation screen before an order is placed, some customers complained that they didn’t realize the second set was already factored into the initial order page. This confusion also led some consumers to purchase two sets, meaning they bought a total of four braces for about $70. This problem could be alleviated by simply including an order confirmation screen prior to charging the consumer’s card.

In September 2014, I spotted a section for the BeActive Brace in a local Bed, Bath, and Beyond here in the Las Vegas Valley. The price of the product was $14.99, as seen in the photo below. The package contains one “Beactive Wrap” for left or right calf.

I consulted a chiropractor in California for his opinion on BeActive. He had not seen the product first-hand, but gave me his observations based on the statements listed on the BeActive website.

He noted that sciatica is caused by physical or chemical “compressive loads” on the nerve, and that “putting more compression distally is adding to the compressive load.” He also stated he had not seen any medical research to support this type of treatment for sciatica. He concluded that this product would probably not provide much relief, if any.

According to the Mayo Clinic, Sciatica is typically treated with medications for pain and inflammation, physical therapy to correct posture and strengthen muscles, steroid injections for inflammation, or surgery as a last resort.

Below is a short video shot during my evaluation of the BeActive Brace.

The chart below shows search volume for BeActive Brace from January 2014 to April 2015. As you can see, there was an initial surge in mid-2014, with a small peak in January 2015. Interest appears to have waned by late 2015, although the product can still be seen in occasional television advertisements.

Reviews for BeActive Brace run the gamut. The website offers no medical research to support claims that it alleviates back pain, and the chiropractor I spoke with was highly skeptical of the product. Finally, I found no manufacturers of braces for sciatica offering anything resembling BeActive Brace.

I don’t believe the product to be a scam, as some disgruntled consumers have stated. All of the relevant information is provided on the website – albeit in fine print in some cases. That said, I also don’t believe that the product has been marketed with the endorsement of any established medical entity. Further, the confusing ordering process has left some consumers with negative opinions of the product even before receiving it in the mail.

Based on my conversation with the chiropractor and research into treatments for sciatica, it would appear that the effectiveness of BeActive Brace is unproven at best. If you plan to order it online, be aware that the second “free” set will be automatically included in your order.

If you wish to try BeActive Brace, your best bet is to purchase it locally to avoid shipping delays and charges.

Be sure to read Part 2 of my BeActive review, which was written after I tested the product.

Have you used BeActive Brace? Give me your thoughts on the product in the comments below.